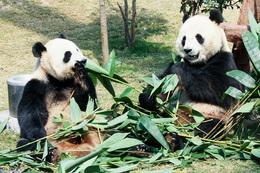 One of the cool things about Slots.Lv is the fact that their name tells you what they're all about: giving players a ton of opportunities to get in on the action with hot online slots. One of the ways they do this is by providing players with a fresh selection of new titles, and that's exactly what's happening now that they're adding two games from Rival Gaming.

The first new game to be added is Panda Party. This is a video slot with 20 paylines, and it has a bit of a "cutesy" theme. It has a Chinese theme with lots of pandas, but other symbols also make it onto the reels like dragons, chests, Chinese lanterns and more. If you make it to the Pandamonium bonus round, then you'll have chances to win lots of extra payouts with free spins and other opportunities to win. This is a fun departure from how serious video slots are often taken in today's industry.

Take a Spin With Vegas Spins

The second new slot is Vegas Spins. This is also a video slot, but it has a more traditional, classic casino feel compared to Panda Party. This is a little more of a serious game with 50 paylines and a bit of an older Las Vegas theme. You'll have chances at free spins thanks to the bonus feature in this game, and you'll also have a great set of visuals with neon signs and other relics of an older time in the Sin City.

Rival Gaming is the provider behind both of these titles, and that's important to point out because they don't often get as much credit as some of the other software developers in the industry. Both Panda Party and Vegas Spins show that they can create titles in a wide spectrum of themes with completely different feels and still bring players a high-quality experience. This is important because they're often slept on because of the fact that they don't have quite as many games to offer as some of the competition. However, the fact of the matter is that they can bring it when it comes to quality, and that's exactly what they've done with both of these games.