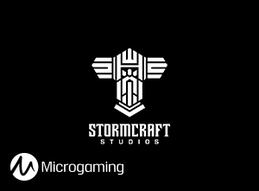 The newest name on the block for the production of high-quality online slots is Stormcraft Studios, and it's a development house that will be operating under the Microgaming umbrella. This new software studio will be offering particularly high-quality slots to operators that use the Quickfire suite, which includes games from a ton of other third-party providers. It's an interesting move, and it goes to show that lots of great new content is coming to players as a result.

What makes Stormcraft Studios so exciting for players is that they're made up of industry professionals who have previously made some of the most popular titles ever released for Microgaming, and this list includes major names like Mega Moolah and Immortal Romance. Now they're out on their own with the way this developer has been structured, and their focus is completely on producing extremely high-quality content for players. This is a part of rolling out a number of developers who will only be producing content for players through the Quickfire platform, the first of which was Triple Edge Studios.

The first official release by this company came on June 20, 2018, in the form of Fortunium. This is a steampunk-themed game that was designed to be played in the portrait format instead of landscape, which is something we haven't seen much of in the business as a whole. This layout allows players to more easily enjoy their games on mobile devices, and it shows that they are definitely focused on mobile ahead of desktop moving forward. This makes complete sense because several of their most popular providers are showing that more than half of their play comes from smartphones and tablets, and that number continues to grow.

In the future, you can expect more great titles to come from Stormcraft Studios. However, this is really under the Microgaming umbrella, and with their initiative to get exclusive providers to offer games for their operators, it seems like they're renewing their high-quality approach in a way that will allow them to better compete with other major software and platform providers. We have to say that this is a very smart strategy overall.