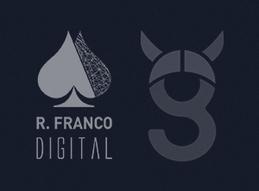 Ever since the studio was established, R. Franco Digital has been striving to offer a dynamic, enjoyable and attractive gaming experience. Recognizing that inking an agreement is the best way to leave an even bigger footprint in the highly competitive industry…

… they joined forces with Skillzzgaming. From now on, this valuable contribution in the form of exclusive games will be delivered to consumers worldwide.

R. Franco’s portfolio hosts titles such as Mr. Miner, Triple Mask, Game of Chronos, Draw Poker, Roulette Royale, Match Machine all developed by the team in the last few months. Their RNG and gaming content is licensed by the Spanish regulatory organization and has certificates from independent testing labs. Under the terms of the agreement…

…their own game server, Kolyseo, will receive reinforcement in the form of Skillzzgaming‘s Gems Odyssey. This space-themed release will make it possible for players to travel to outer space in search of precious gemstones through the galaxy. It takes at least three gems in order to advance in this stellar trip to wealth in this actionable skill game.

As far as Javier Sacristán Franco, Managing Director of R. Franco sees things, this opportunity should result in simpler and smoother game development. Commenting on the alignment with Skillzzgaming, he announced as follows:

“We are very pleased with this co-operation and we hope that it will be the first one of many more to come: players enjoy more, our library increases its value and for small to medium-size developers this formula makes it easier and more comfortable for games to come into existence. Our Kolyseo server is an open RGS where we implemented APIs that are at the disposal of other game development studies in order to use the infrastructure and services, such as the RNG, safety, audit, databases, etc., and take advantage of our capability for game distribution while retaining their brand and identity. Kolyseo is integrated in major user platforms, including our own, IRIS.”

Founded in 2015, Skillzzgaming is an innovative studio which gathers 3 industry veterans and passionate gamers. With a desire to change the industry, by implementing content which represents a combination of casual games, significant winning potential, and the choice to impact the game itself. Widely available to numerous leading operators……

“We are delighted for the opportunity to partner with R. Franco on their innovative and open platform. We trust our engaging games will provide a new and exciting experience to R. Franco customers.”