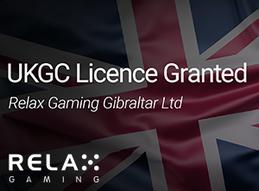 Relax Gaming (RG) saw its Gibraltar subsidiary, Relax Gaming Gibraltar, receive United Kingdom Gambling Commission approval, which indicates new growth opportunities "in one of the most important markets in the world." This means that RG games are available to UK providers via its Gibraltar subsidiary, which the group welcomes as “another milestone” in the group's continued growth strategy. Its partners such as Boylesports and BetVictor have already successfully completed the transfer, and UK brands Entain, including Ladbrokes will be the next. This is the group's latest licensing approval from the Gibraltar licensing authority and with further expansion in the United Kingdom, this brand seeks to further improve its position in many regulated markets, including the Scandinavian countries.

Tommi Maijala, Relax Gaming CEO, said: “Following a fruitful relationship with the UKGC through our Malta-based company, having all our products and services approved for our Gibraltar branch is another major commercial highlight for us. Its significance will be felt across the business, including by our valued third-party partners. This licence acquisition represents fresh opportunity in our drive to deliver excellence and growth across all regulated markets.”

Nearly a Decade of Experience

Relax Gaming has been increasing its library of games for almost 10 years, which has given it a lot of time to research and test the types of features and functions that casino players appreciate the most. The company has already established important partnerships with some of the well-known online casino content aggregators, but it is constantly looking for new partners and new places to showcase its games. This casino provider launched more than 60 games where majority are slots, however, there also couple of table games too. In 2019, the company released a new version of The Final Countdown video slot, created by Big Time Gaming. It was one of 50 new trade deals the company signed in just a few months. This is clear and compelling evidence of the rapid growth of the brand's reputation as one of the most dedicated providers across the iGaming industry.