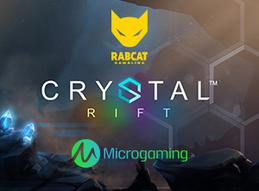 The latest release on the Microgaming Quickfire platform is produced by Rabcat. This game is the Crystal Rift slot, and it brings the level of innovation to the table that players who are familiar with Rabcat's work probably will not be surprised by.

One of the main features that players will love is the wild grid feature, which is something that hasn't really been done before in a slot. The idea is that there are 20 different ways to they can fall onto the reels to give you extra ways to win, and when you add the locking, cascading reels to the mix, you get a style of gameplay that is as exciting as you'll find in the online slots world. Rabcat definitely knew what they were doing with this title, and they've seriously brought their "A-Game" when it comes to the gameplay side of this slot.

Something really cool about this title is how it looks. You'll find yourself deep into a cave with a style of graphics that looks 3-D in some places and flat in others. This mix of graphical styles creates a unique aesthetic appeal that few titles from the competition can match. Along these lines, it shows that they not only know how to put together the gameplay side of a title, but they also know how to make it look so appealing that you won't want to switch off to anything else.

We're not sure if we'll see another Rabcat title released in 2018, but with the holidays coming up, we won't be surprised if we do. With that having been said, even if this does end up being their last release of the year, it will definitely be a good way to cap off 2018. As far as other titles on the Quickfire platform go, we'll most definitely see more before 2019 gets here, but the developers who provide content there will be hard-pressed to beat Crystal Rift on every level.