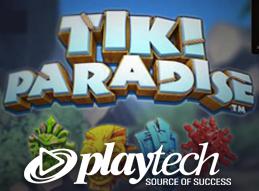 Playtech has caught a lot of flack over the past few years for seeming like they have slacked a bit on their online slot development. While it's true that they have focused primarily on other sectors in the online casino industry, the fact of the matter is that they have still been hard at work here as well, and we can see that in a major way with the innovations that come along with the new Tiki Paradise online slot.

What's so critical about Playtech releasing this game in the way they have is that it's a true omni-channel release with the ability to be played on mobile, desktop and in land-based terminals. This blurs the line between the online and land-based sectors of the casino industry, and that's made even more the case by how the in-game rewards system has been set up to encourage play on all platforms.

Normally, there may be a game available in a few different platforms, even in land-based terminals. However, it's hardly ever the case that your progress on a land-based terminal carries over to the online slot version and vice versa. With Tiki Paradise, that's exactly what you get as long as you don't go more than two weeks without playing.

The format for this game is about as straightforward as you can get. It has five reels and three rows, and there are 10 paylines active on the reels. You can get the Wild Nights feature for a random stacked wild reel, and you can also get randomly awarded Win Shuffle features, which will offer a chance to shuffle the reels to produce a better total win than whatever it is you have gotten already.

This release is coming to Coral first because of their connection with both the online and land-based sides of the industry. However, players will be able to get in on the action fairly soon no matter where they play, as long as the Playtech software is used. This is an exciting release with major implications for the industry as a whole.