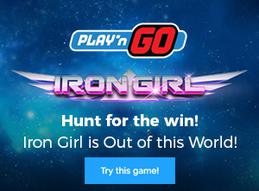 The latest slot release from the award-winning software company Play'n GO will send players on an exciting trip through space, traveling with Iron Girl to fight the forces of evil all while racking up big wins.

The title is a 5-reel slot that sends players on an intergalactic bounty hunting operation with the game's titular character, Iron Girl. She and her special Iron Armor are on a mission to track down the most evil, high-profile criminals, and she needs the player's help to triumph.

The reels consist of three rows and 20 paylines, and the ethereal background and futuristic soundtrack add an additional level of immersion. The true draw of this slot, however, is in Play'n GO's debut of their 3D graphics capabilities. Despite the technology becoming extremely popular in online casino games recently, the company has held off on using it until now.

Why Play'n GO Chose Iron Girl For a 3D Debut

He says, "3D graphics are getting very popular in slot gaming, but we didn’t want to rush right into using them just because the option was there, we wanted to make sure we had the right game and that it would look perfect! When designing Iron Girl, we decided we needed something visually to make the game stand out and do justice to the concept and the entertaining nature of the game, so the time was right for 3D."

Between the level of care that went into the overall design and the expected level of gameplay, the software provider may have struck upon another major success.

Swedish gaming software supplier Play'n GO has been serving the online gaming community since 1997. Their portfolio features an impressive number of beautifully designed slots, as well as a varied selection of card and table games.

The company has previously developed other smash-hit video slot titles such as Book of Dead, Gemix, Cloud Quest, Gunslinger and Energoonz. Their games are innovative and regularly feature high production values in addition to interesting bonus features that keep players consistently entertained. The addition of a slot with 3D graphics simply increases the success of their award-winning games library.