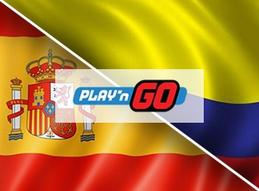 Leading online and mobile casino slots supplier Play’n GO recently announced that the footwork ahead of entering two new major markets has been completed. The Swedish company has been licensed and had its games certified for play in Spain and Colombia. Following the rigorous certification process, the approvals will allow Play’n GO slots to be accessed and supplied by operators that are licensed in the two markets.

The iGaming sector in Spain has continued to show phenomenal growth, especially in casino betting with slots accounting for more than half the growth in 2017 according to numbers compiled by Spain's Dirección General de Ordenación del Juego. Colombia has also shown impressive growth in the last year, buoyed in part by Coljuegos, the country's official gambling regulatory agency's requests to the ICT Ministry to reign in unlicensed operations and the regulator meeting new licensing benchmarks in South America's only regulated jurisdiction.

Play'n GO adds the two markets to a litany of jurisdictions where the supplier has already proven to be compatible including  Alderney, Belgium, Croatia, Czechia, Denmark, Italy, Lithuania, Latvia, Malta, Romania, and the United Kingdom - along with several other regulatory realms that are currently at various stages of confirming their games.

According to Group Compliance Manager of Play’n GO, Sissel Weitzhandler, the company has a strong track record of supplying European and LatAm operators with certified content and that history is one of the things that makes them attractive to local operators.

He added: "These in-depth certification processes differ from country to country, so it’s testament to our compliance team that we’ve acquired these without any issues, particularly with Spain and Colombia’s regulatory environments being so different," according to a press release issued by Play'n GO last week.

The company will be attending the Industry's largest trade show at ExCel London when ICE 2018 kicks off in two weeks. Play'n GO will be showcasing new product verticals and showing delegates how the company's expertise and experience can benefit not only online but land-based casino operators as well.