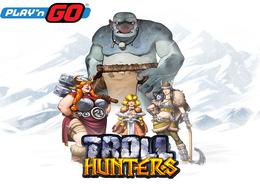 Whenever most players think of viking-themed slots, they typically thing of big, burly men fighting either each other or some type of monster or foe. In Play N Go's new Troll Hunters video slot, the setup for the plot is a bit different, and this gives the game a unique starting point that helps to really drive the slot as a whole.

The main premise of this game is that the men have gone out hunting in a viking village, and it's up to the women left behind to save the day. The three women defending the village from a troll attack are Liv, Siv and Ingeborg, and they take on the trolls in a snowy environment that's got solid Scandinavian graphical motifs woven in. Play N Go has done an excellent job at creating a spin-off of the usual premise of viking-based slots, and the visual appeal of this game is solid as well.

The format of this game is atypical as well. It uses five rows and five columns, and you hit winning combinations by lining up at least three matching symbols horizontally or vertically anywhere on the game board. Whenever you hit a winning combination, the center spots turn into a wild, and the other winning symbols in the combination fall away. This causes more symbols to fall into place for what amounts to an avalanche-style re-spin feature, which will remind a lot of players of casual and social games like Bejeweled and other similar types of gem-matching games.

Play N Go has had a pretty good year in 2016. While we are winding down with just a few more weeks left in the year, they have come out with a number of innovative titles over the past 12 months, and the release of this snow-filled, viking-focused slot coming into the winter months is a great example of them avoiding the holiday-themed slot trend while still coming out with something that makes a lot of sense based on what time of year it is. They have a tremendous amount of momentum going for themselves right now, and we expect that they will continue to do great things in 2017.