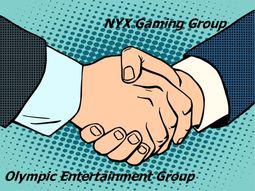 The NYX Gaming Group has made a lot of moves in 2016. They've released some new games, but we don't think that's really the big news for them this year. Instead, we think it's all of the big deals they have made for content distribution through their OGS (Open Gaming System) platform. They've added to this list recently with a new agreement with Olympic Entertainment Group.

How This New Deal Works

OEG is an international corporation that focuses on different types of gaming. They will soon be integrating content from NYX's OGS, and this will see their titles spread across a wide range of different platforms, including land-based options. Because video terminals are where the real expansion is these days for companies like OEG, we're seeing more deals like this where great online gambling content (especially online slots) is being added in a land-based capacity, and this is just another example of that in action.

The fact of the matter is that companies that have been focusing exclusively on online games have always formatted their titles to work on a video screen. Companies that have worked with land-based titles only, however, are spread a bit more thin, so they don't necessarily have the same portfolio or interest in building a portfolio for video-based titles. That's how you end up with the NYX Gaming Group getting their OGS platform titles in land-based gaming terminals thanks to deals like this one with Olympic Entertainment Group because they're able to offer a very high-quality product.

About the NYX Gaming Group

The online casino platform developed by NYX is called OGS, and it puts together titles from their own portfolio and from companies like NextGen that they have purchased in the past. This platform has a great selection of games, and it has won awards in the past, including the 2016 Platform of the Year. They're able to offer their games on a wide range of different platforms thanks to the flexibility of the OGS, and that's one of the reasons why we have seen so many big deals with them so far this year.