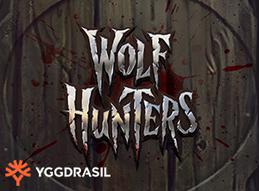 People have been obsessed with the ideas of monsters like werewolves for centuries, and the latest Yggdrasil online slot brings a werewolf theme to life. It's called Wolf Hunters, and it's available to play right now from online casinos that have the Yggdrasil Gaming software, which includes all Microgaming Quickfire sites as well since it's a part of their suite.

What to Expect From These Wolves

There are two hunters and a werewolf that make up the three main characters of the game. There's a hunter on each side of the reels, and the werewolf with its health meter is over the top of the reels in the center. The idea is that you can fight the werewolf as it appears on the reels to boost the meter for either of the hunters and decrease the werewolf's health, which gives three total meters to keep up with.

When one of these meters is complete (or drained in the case of the werewolf's health), then you get a bonus feature. Two different free spin features can be had with chances to power up the hunters' abilities to give you expanding wilds and other extra payouts on the reels.

While the free spins features are more along the lines of features that give a lot of value but that don't hit super often, the re-spin feature gives a fair amount of value while hitting every single time that you get a wild on the reels. It will hold in place and allow the other symbols to spin again to give you extra chances to hit winning combinations that pay out.

What stands out to us in particular about this title is its overall look and feel. It has a dark, spooky feeling like it's out of the middle ages or something, and the soundtrack helps to immerse players in this fantasy land as well. You'll feel like you're working your way through the old city streets to try to take down those werewolves along with the hunter and huntress on the reels.

If you like lots of action with a high hit-rate, then you'll especially enjoy the gameplay aspects of this title as well.