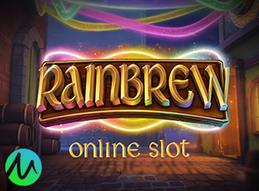 New additions are made all the time to the Microgaming Quickfire suite. The latest is a Just for the Win slot called Rainbrew. This game stands out for its atypical approach to the "all ways" format, which includes two extra reels that run horizontally instead of vertically to give players a number of extra ways to get winning combinations.

What Stands Out About Rainbrew

Here are the key things that you need to know about the Rainbrew online slot:

Aside from all of that, the Irish luck theme is handled pretty well with strong graphics.

Since the partnership between Just for the Win and Microgaming started, we've seen some innovative features from the brand. We really like what they are bringing to the table, and it's no surprise because the Quickfire suite is all about pulling together top-tier content from some of the best providers in the entire industry.

In particular, the concept of combining horizontal and vertical reels that operate independently of each other is something that we can't remember having seen before. This type of "thinking outside of the box" is definitely what helps to set titles apart from the field in the modern era.

It's clear that we're at the part of the year where things start winding down. In just a couple of months, we'll be at the holiday season, and that's when companies like Microgaming really turn up the heat with lots of new releases that are timed with people having a lot of time off of work and other commitments. Prime time for big releases will be up before you know it, but we're still seeing a consistent push of new content from partners like Just for the Win in the meantime.