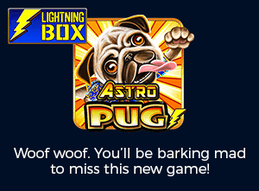 Something that Lightning Box Games is known for with their slots is putting together games that have themes that really stand out. Their latest release, the Astro Pug slot, really embodies that approach. It's about a small pug dog who finds himself in the middle of trying to help you to get a lot of wins. With lots of Asian symbols on the reels along these lines, the theme's definitely different than most anything you will have seen before.

The main thing players are going to notice right away is the usage of Lighting Box's Reelfecta reels feature. This places 16 miniature reels in the center reel of this five-reel game, which gives you an opportunity to turn small payouts into much larger wins by what's effectively a big multiplier. It's a cool gameplay feature that helps to mix things up quite a bit.

Casumo Casino actually received this title on September 5, 2018. They will have it exclusively until September 19, 2018, which is when it will be released to all other casinos that use this company's software. That's a fun part of the action that keeps things from always being exactly the same at all sites that use the same software, but it doesn't keep players waiting too long if they just want to wait it out, so we can get behind either option players have.

Lightning Box has done a lot in 2018 to get the attention of players and experts in the industry. They've consistently released new titles that break barriers in terms of using different styles of themes, but the gameplay of their titles has also been strong.

They've also gotten their titles in front of more players than ever before through smart deals with major software providers like Microgaming Quickfire, which has a natural level of growth on its own, as well as forming new content distribution agreements in the meantime. They've definitely handled things well on all fronts here, and we're sure that players are going to love what they're offering with their newest title.