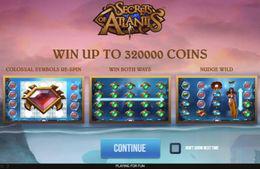 There have been a lot of new slot releases so far this year for Net Entertainment. While they have always been known for producing extremely high-quality slots, 2016 is the first year where they've started to make a name for themselves based around releasing a lot of slots. Secrets of Atlantis is the newest game announced for release from this software company, and it's a bit different than anything they have released so far this year.

What Makes Secrets of Atlantis Special

While most video slots are based around triggering a bonus feature, which also holds a lot of the value in the game, Secrets of Atlantis focuses on the normal gameplay and adding value without having to jump into a second mode of play. For example, there are stacked mermaid wild symbols, and when you get one anywhere on the reels, it automatically nudges itself into place to cover the entire reel. This is much like an expanding wild symbol, except you have better chances to hit it because it always shows up in stacks of four.

Net Entertainment has produced games before that used mega-sized symbols, and in this game, things are handled a little differently for this feature. If you get a white, bubbly background across all three of the middle reels, then all three of those vertical columns of symbols will combine into one giant block with just a single giant symbol on it. This symbol spins to randomly determine the symbol that will be in place on it, and then that symbol covers the entire 3x4 area. This obviously makes hitting multi-line combinations much easier.

Keeping in mind that this is a company that has won EGR B2B awards and other important awards for several years running, it's not particularly unsurprising that they have produced so many high-quality titles so far this year. However, what is surprising is that they may only be just warming up, especially with future releases in the NetEnt Rocks series, which debuted this year with Guns N Roses and Jimi Hendrix. Overall, they are sure to wow the players with whatever else they come out with over the next five months.