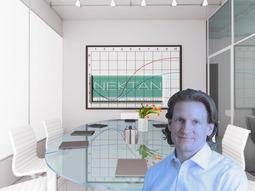 Like any major industry, different executives come and go in the online gambling world. Nektan has recently experienced this themselves with a new CEO. After Gary Shaw was put in place as the interim CEO for a period of time, Leigh Nissim has been named the new CEO of the company. Shaw has been moved to the Director of Strategy post and is still with them.

Nissim has a great amount of experience with over 17 years in the business. He's a very solid pick with heavy experience in marketing, and he previously spent four years at International Game Technology as their Global Commercial Director. It's clear that he has the credentials for the job, and we think that it will be interesting to see how he does with the company since they have seemed to stagnate to some degree in 2016 as far as the amount of news we have heard from them on the online gambling side.

Nektan stands out in the online gambling world because they don't focus exclusively on the games for this particular industry. Instead, they have a more generalized focus on mobile overall, and that includes "freemium" style games that give players a chance to play a title for free while optionally purchasing upgrades and other in-game perks. This has allowed them to gain a real foothold in places like the United States where their selection of real money slots

wouldn't necessarily be easy to distribute.

Nektan is known for producing some pretty solid games. They also operate a handful of online and mobile casinos themselves, and they made news a few months ago in August when they sold off a few of their bigger brands. They are based in the United Kingdom, and they have licenses from both the UK and Gibraltar. This makes it easy to put full confidence in the fairness of their games and the quality of their business practices. With this new CEO in place, we expect to see Nektan pick up some momentum in the first several months of 2017 and get back to making the news more often.