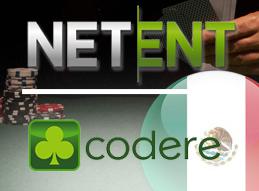 Codere is a company that operates online casinos in a few different regulated markets. These markets include Italy, Mexico and Spain. They have partnered with Net Entertainment in the past to provide content for their casino sites, and a new deal between these two companies has led to NetEnt's official launch into Mexican territory.

Online gambling is regulated in Mexico, and this is a big part of the reason why Net Entertainment has decided to enter. They've used a strategy of only entering areas where the industry is regulated, and this has helped them achieve a great image. This image, in turn, helps them to get their foot in the door earlier than the competition in many cases when new markets emerge. The result is a snowball effect that has seen them expand more and more over the past few years and see their content in front of more and more players.

The Importance of the Codere Partnership

Codere has worked with NetEnt previously, and that's a pretty important part of this deal. This software company can provide their games through Codere's license in Mexico, which means they don't have to get their own license in that particular country. This is great news for them since this operator is one of the largest in Mexico, which means their initial step into this particular country is partnering with one of the biggest names in the Mexican online casino industry as a whole. It's a great strategy and a great way to enter a market.

Both 2015 and 2016 were excellent years for Net Entertainment, and they were able to pull down some pretty serious awards over the past 24 months. They've released extremely high-rated video slots, and they've expanded their influence and coverage to tons of new areas in front of thousands of new players. It's looking like 2017 is going to be more of the same from this company as they fight to keep their place in the top tier of software providers for online casinos, and it's going to be tough for any company looking to take their place.