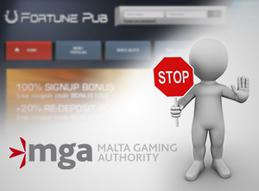 A variety of websites for different types of online gambling have links back to the Malta Gaming Authority's website as a part of their description of their licensing there. Unfortunately, there are a lot of sites who would think nothing of faking a license, including this type of linking. Recently, the Malta Gaming Authority has disavowed links from a number of different websites, indicating that they have no connection with them in terms of licensing or any other type of deal.

Which Sites Are Affected?

Of the sites listed, winner-bet.com stands out as no longer being up and running. The others include wpcasino.com, play-azart.com, greatway-casino.net, lucky-play.net, fortunepub.com, diamond-777.com, caesarcrown.com, explosionbet.co and casino-royal.net. These sites have other interesting pieces of alleged information on them, like claiming to be licensed in other jurisdictions or being a part of some of the biggest gambling companies in the world. However, it's the specific wording that is a giveaway for a number of them at this point.

The wording on these sites indicates that they are licensed by the Malta Lotteries and Gaming Authority, known as the LGA for short. The problem is that this is the previous name for what is now the MGA, and it's been about two years since it went by the LGA name. Along these lines, there's the interesting point that these sites made claims about licenses that expired years before that, and it's not clear at this point of any of them actually had LGA licenses at the time or not. Regardless, none of them are licensed for online slots or anything else in Malta at this point.

In other Malta-related news, they're catching some flack from Belgium right now as well. Belgium has an online gambling blacklist, and Malta is holding the 18th edition of the European Commission's Expert Group on Gambling Services. They've invited speakers that the Belgian Gaming Commission have included on their blacklist, and Belgium is claiming that this is blatant disrespect. They're on the blacklist for offering games to local players without a local license. Some letters have been sent to the MGA asking them to change this, but it's unclear if anything is actually going to be changed.