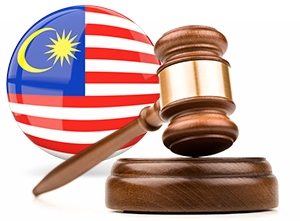 Malaysian authorities are making good on their promise to crack down on illegal gambling operators, including online providers. The country's Common Gaming House Act 1953 was created before the advent of online gaming, and although still considered illegal, some operators have found ways to get around the act by using family entertainment center licenses and other means. One politician wants to close any loopholes that might exist.

A latest national crackdown on illegal gaming was launched a little over a month ago and first focused on illegal gambling dens as the online situation is much more complicated with servers located overseas in most cases. Most privately held online casinos accept players from Malaysia, as can be seen by choosing the country from a drop-down list or searching the "country" pages on many websites that review casinos. Some online sites offer their services without a license in certain countries, perhaps believing that it is not the government's or a majority of citizens' place to dictate what individuals can do with their own money. One such casino that is not licensed by every country they operate in is Intertops. However, they do answer to the authorities of the country they are incorporated and licensed in, Curacao.

Deputy Prime Minister Ahmad Zahid Hamidi recently told local media, "Special attention should be given to [improving] online gambling laws because online gambling activities, which can be conducted via smartphones, are becoming rampant right now," according to a report on Free Malaysia Today.

He also said that Malaysian law enforcement agencies have collaborated with Interpol and multiple telecommunication companies in an effort to stem the growth of online gambling in the country dominated by Muslim law.

Between September 4 and the end of October police have reportedly conducted nearly 6,000 operations across the country with the states of Selangor and Penang producing the most arrests.

"We have deported 416 China nationals believed to be involved in the Macau scam syndicate, and efforts are being intensified to investigate 100 other suspects before they are deported to their countries of origin,” Zahid said.

The Betting Act 1953 was last revised in 1983 but has been amended several times including 2001 and last officially published in 2006. Zahid has reportedly said that the home ministry (KDN) was working closely with police and the attorney general’s office in order to determine the best course forward. The two options mentioned so far have been a new amendment to the antiquated gambling law or the crafting of an entirely new law that would take aim at online gambling specifically.

While it is widely believed that with the exception of Casino de Genting all gambling is illegal in Malaysia, a report in the U.S. National Library of Medicine published online 2016 May 21 under the title, Gambling participation in Malaysia states: "At present, in addition to the Casino de Genting, other legalized gambling entities include privately owned lottery operators such as Magnum Berhad, Sports Toto, and Damacai. The non-casino gambling industry in Malaysia has been estimated to be worth US$2.99 billion (Berthelsen 2013)".