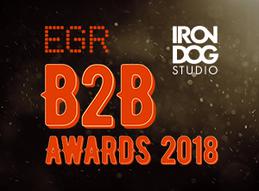 One of the things that's pretty interesting about the online casino industry is that it has to police itself on certain levels because there is no international standard that everyone is held to. Along these lines, there are also large award ceremonies that are important because they reward companies for doing well. The EGR awards are one of the most important of these, and Iron Dog Studio has made a shortlist for an important award as a part of this ceremony.

The Importance of This Award

The shortlist that Iron Dog Studio has made is for the Software Rising Star. Some major names like Yggdrasil and Pragmatic Play have won this award in the past, and being listed with those names so quickly after having opened their doors will really put them in a position to be noticed in the industry even more than they already have been.

What Got This Company to This Spot

Since opening their doors as a part of the 1x2 Network during a restructuring of that company, Iron Dog Studio has gotten a lot of attention for their high-quality online slots. They've picked up a deal where their titles are distributed through the Microgaming Quickfire platform as well, and that has gotten their games in front of a ton of players. As a result, their popularity has grown, and that puts them in a place to really earn their spot on this shortlist, even if they end up not winning the thing.

Industry awards like the EGR awards help to recognize the best that the industry as a whole has to offer. This usually leads to increased popularity and increased status in the business, which in turn leads to more business opportunities. It's really in their best interests to get into this type of position so that they can earn these types of things, and the Software Rising Star award gives them a chance to do so without having to compete against the juggernauts of the industry that have been established for decades. Putting things on a more fair playing field gives them an opportunity to get this recognition even while they're growing as a company.