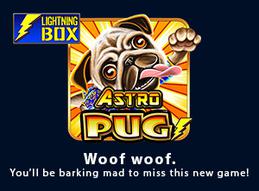 Astro Pug is the latest video slot to be released by Lightning Box, and it's gotten a ton of attention because it's a bit unusual in terms of how the theme is set up.

While it has a bit of an Asian flavor to it, it actually centers around a pug dog, which looks hilarious on the reels and is the centerpiece to a loud, proud and vibrant slot experience.

Something that Lightning Box uses with some of their games is the Reelfecta format, and you find it with this title as well. The way this works is that players will have an all-ways format game with five reels and three rows. However, the center reel will actually have a 4x4 grid to represent a 16-row reel instead. This gives players a whooping 1,296 ways to get paid on every single spin, so it's clear that a high hit-rate comes along with a hilarious pug in this title.

Other Aspects of the Format

This 4x4 grid for the center reel also lends itself to some important features in this game. You can get big multiples of small wins thanks to this extra-large center reel. On top of that, five of the bonus cracker symbols anywhere on the game board gives you a set of free spins. Features are a big part of the gameplay, but so is the high hit-rate with a lot of small and medium wins thanks to the 1,296-ways-to-win layout that comes along with the Reelfecta feature.

We're headed into the last quarter of 2018, and Lightning Box has shown no signs of slowing down. They've had a number of big names that have seen releases so far this year by this company including titles like Respin Rhino and Lightning Horseman.

The winning recipe for this developer has been a strong combination of great themes and fast-paced gameplay, so players pretty much know what to expect in terms of excitement when they sit down to play. Even with that general guideline, their titles like Astro Pug all play a bit differently with different things to offer.