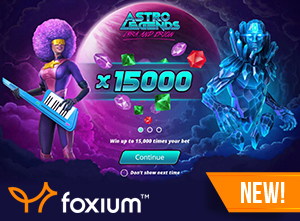 Foxium is a producer of online slots known for making games of a particularly high quality. Their latest release comes in the form of Astro Legends: Lyra and Erion, a game that takes place across the cosmos as a famous intergalactic band member is out to save the galaxy.

What This Game Brings to the Table

Astro Legends does not use a typical format. Instead, there are 22 symbol spots that make a gem-shaped layout, and you'll win if you get five matching symbols adjacent to each other at the same time in any configuration. This creates a different style of play than what you normally see, and that's made even more exciting and fast-paced with the randomly appearing wild symbols that add random multipliers to any payouts they help you to get. There's obviously quite a bit of value tied up in them along these lines.

Something else that's pretty important about this title is that it's one of the first created using Foxium's fairly new in-house game engine. This helps to bring better graphics and presentation with 3-D characters and other goodies, and that ultimately helps to boost the quality of the experience for players. It's the kind of thing that they hope will help to make them much more competitive, and every indication is that it's doing the job that they hoped for.

This game, along with the whole portfolio from Foxium, is available on the Microgaming Quickfire platform as a part of their content distribution agreement.

Foxium has been producing games since 2015, and they've been on the Quickfire platform for almost that entire time because of the quality that they bring forward both from a graphical standpoint and from the gameplay side of things. They might not have the most games out there of any developer, but the games they do have are definitely comparable with the best available in the industry as a whole.