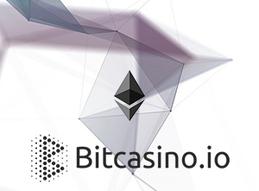 Different cryptocurrencies have been used in online casinos for a couple of years now, and they're really seen as a viable option that could take over more and more of the market as time pushes forward. What we're seeing right now with Bitcasino.io just backs that idea up as they have added Ethereum to the overall banking method selection. On top of that, they've added a mobile cashier that has some innovative options.

The Importance of Ethereum

Having Ethereum added as a banking option is a pretty big deal because of its popularity and because of how it's a bit different than other cryptocurrencies in terms of how it's set up. What sets it apart is that it's designed to be representative of an amount of virtual "work" instead of simply being tied in value to whatever the market dictates through buys and sells. As a result, its price is seen as more stable, and the entire system is set up to be somewhat futuristic in nature.

Flexibility is the name of the game with the new mobile cashier. It's designed to work with all mobile devices, and as we all know very well, compatibility is a pretty important part of the mobile sector. This setup allows players on Bitcasino.io to track all of their deposits and withdrawals as well as make them with just a few taps on their touchscreen device. This works for tablets and smartphones, and it works for virtually every type of device, which includes iOS, Blackberry, Android and others.

The Importance of Innovation

Cryptocurrencies like bitcoin and mobile are two of the most important parts of the online casino industry right now. They're where the cutting edge is definitely located. With Bitcasino.io really pushing on both of these, it goes to show that they are keeping things pushed along and setting trends that the rest of the industry will follow. This is what they have been doing since they first opened their doors back in 2014, and we have every reason to believe that it's what they'll continue to do for quite a while.