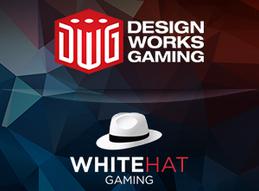 Design Works Gaming (DWG) has signed a content distribution deal with White Hat Gaming. The partnership will "significantly" expand the traffic on the White Hat platform. According to the deal, the entire gaming library from DWG will be available on the platform. The deal follows a collaboration with Kindred Group and now White Hat will also launch several games soon, including Hold Your Horses and Diamonds, Sapphires and Rubies 4Play will be available through the platform. But that’s not all; DWG promises additional content that will be added in the coming weeks and months.

This partnership is the latest consolidation in their content catalog, which has recently been re-energized through ties with mobile game developer OneTouch! Design Works casino content is attractive, innovative and, most importantly, has a proven track record of generating additional income!

DWG CEO, Troy Zurawski, said: “With offices across three continents, a fast-growing team and an impressive list of operator partners, this partnership with White Hat Gaming significantly increases the reach of our content. We’re confident our games can be a real driver of both engagement and revenues for White Hat Gaming’s operators.”

Design Works Gaming is a casino operator with a long history in the casino world that began many years ago. Its work has roots in the 1940s while Troy Zurawski, CEO and Founder, continued to develop a family business. He founded DWG in the mid-2000s and with extensive experience and deep knowledge of casinos, he was ahead of the competition. In the early 2000s, he noticed that the online casino industry was showing a very weak relationship between providers and players, and he knew exactly what to offer players. Zurawski decided to simplify the process and make game development efficient and affordable for customers. Your mission is based on the fact that the game is most important and comes first. Rather than launching slots with similar features and styles, the team focused on creating unique games.