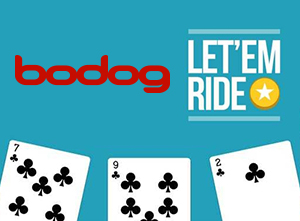 Let Em Ride is a popular, poker-based table game that gets a lot of attention because of the nature of the gameplay. It gives people chances to make strategic decisions in a version of five card stud that is played against the house, much like certain forms of video poker. It's also a game that recently paid out almost $400,000 to a lucky player at Bodog Casino.

There are two different ways to win at this version of the game. The first is through the normal pay table, and you'll win this way by getting paid based on the final poker hand value of the five cards you are dealt. The other way is with a side bet that is connected to a progressive jackpot. The lucky player, a man named Jerry from California, placed a $5 wager on the regular game and put down a $1 wager on the progressive as well. He won with a royal flush for a 1,000x payout on his regular wager for $5,000, and the remaining $392,879 came thanks to the progressive.

While this win is exciting in and of itself, the game gets a lot of attention otherwise because of its strategic gameplay. Players start out by making a wager known as the ante. Three cards are then dealt, and you have the option to place another ante (worth the same amount as the first) or not. A fourth is dealt, and you have the same betting option once again. After the fifth card is dealt, you're given a payout based on the total amount you had wagered overall.

Bodog Casino has been around since the mid-1990s, and it was one of the first online casino brands. It uses custom software along with titles from Rival Gaming, Realtime Gaming, BetSoft and other providers to give players a good mix of different titles to play. They have plenty of slots, but they also have a tremendous selection of table games, and that puts players in the driver's seat with lots of options like Let Em Ride, which can pay out some pretty substantial prizes.