A New Collaboration on the Horizon: NetEnt and ReelPlay Sign IP partnership 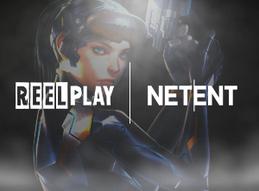 NetEnt Product Services Ltd and ReelPlay Pty Ltd have signed a new partnership deal. This agreement will strengthen their rights associated with their respective marks InfiniReels and Infinity Reels. Under the terms of the two companies’ recent alliance, both brands are set to work together to jointly extend and protect their franchise.

… NetEnt is set to release its first InfiniReels game – Gods of Gold InfiniReels. The InfiniReels mechanic is the latest innovation to be presented by this developer. It increases the number of reels in slot games with each win. There is an infinite number of reels and win ways available within that game.

On the other hand...

…ReelPlay debuted its Infinity Reels mechanic last November. The new feature provided the chance to add an additional reel, re-spin, and even a multiplier with each spin. Its first slot with this component was El Dorado Infinity Reels that hit the market in November 2019. A follow-up game was Giza Infinity Reels slot that was launched earlier this month. The third title of the series is scheduled for a release in June 2020.

Partnership Between NetEnt and ReelPlay As A Next Logical Step

The InfiniReels and Infinity Reels slots mechanisms are very similar, so it's no wonder why companies decided to partner up and protect it. According to Bryan Upton, Director Games at NetEnt, the collaboration was the next sensible move since both brands were developing similar products independently.

“In light of both companies independently following similar ideas, it made sense for us to come together to reinforce our unique propositions in a highly competitive market. I would like to commend and thank ReelPlay for their innovative approach and for working together with us in these dynamic times”, said Upton.

David Johnson, Chief Commercial Officer at ReelPlay, expressed its enthusiasm for teaming up with Swedish provider.

“We are happy to have agreed a collaboration with an established, global pioneer such as NetEnt”, commented Johnson the partnership.

…ReelPlay was founded in 2014 as Chance Interactive but was fully rebranded in 2019. Based in Sydney, Australia, the slot provider holds a license from the UK Gambling Commission to provide its content to UK-facing gambling operators and content aggregators, but its portfolio is also available across multiple other markets.

News about NetEnt’s partnership with ReelPlay emerged shortly after the provider announced the launching of its content in two new regulated markets.

By obtaining the global standard ISO 27001 certification in early April, the brand was allowed to enter the Swiss gambling market and supply its content to locally licensed online casinos.

…the Swedish supplier announced its Colombian debut through a previous partnership with US online casino operator Rush Street Interactive.

Rush Street is one of more than 15 locally licensed operators in Colombia following the reorganization of the Latin American nation’s iGaming market several years ago. Since the provider has been supplying its content to the operator's US-facing online operations for a while now, proceeding into the Colombian market together didn’t come as a surprise.

As both NetEnt and ReelPlay are one of the leading gaming providers, their partnering up will probably create a powerful force in the gambling market.