What Makes Craps a Good Game to Play? 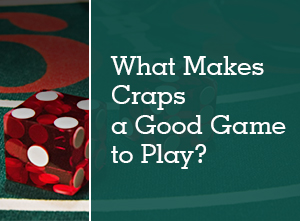 If you really like to gamble in a casino, and don't want to get too involved with the intricacies of strategy, then craps may be the game for you. Unlike a lot of games you can play in a casino, the player has more control in craps - not necessarily over the outcome, but over the pace of the game. And it especially applies if you, as the player, are the "shooter," because the game doesn't start until you throw the dice.

If you are betting but are not the shooter, you're going to have every opportunity to make whatever bet you need to make before the shooter rolls the dice.

You can find better odds than in other games, particularly if you do not like to play blackjack or are not adept at Basic Strategy. You can actually play forever at the craps table where your disadvantage to the casino is less than two percent.

Unlike blackjack, where you are more or less grinding out even money every time you win a hand (with the obvious exception of the two-card natural), there are many propositions at the craps table that pay off at long odds, allowing the lucky player to win amounts in almost exponential fashion.

There is a lot of talk about the player's ability to get comps from the casino when playing craps, more so than most other casino games. However, for the purposes of discussing craps in general and as we progress into talking about the online version, we will not put a lot of weight behind the issue of comps.

In the brick-and-mortar setting, craps is probably the most social game. Walk into any casino and chances are the loudest noises you'll hear will be coming from the part of the gaming area where the craps tables are. There is more camaraderie between the players than in more laid-back games like roulette, blackjack, baccarat or keno, or in games where players vie against each other, such as poker. Unlike slots or video poker, it seems built for interactivity between the participants. In fact, it is a game where one player, or a group of them, can clearly be rooting for another player since so many people find themselves betting with the shooter.

The rules, once you learn them, are pretty clear at the craps table, which in a way sets it apart from blackjack tables where sometimes there are rules you don't know about or don't notice (like even money on two-card 21's, for example) until you're staring the applicable situation right in the face.

It's surprisingly easy to learn, and hopefully, you'll be able to pick up the basics from us and start swinging away!

How to Play Craps