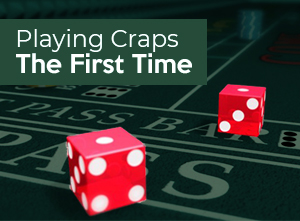 During several trips to Las Vegas, I really became bored of blackjack. I mean, don’t get me wrong – blackjack can be a great game, but I wanted something more lively and exciting. I wanted to experience gambling at its best.

Slot machines were out of the running – all around me were old ladies dumping quarters into the machines and staring lifelessly at the screen until they won – definitely not for me.

Roulette was fun to some extent, and I was always up for a game of Pai Gow Poker (where the little old Asian ladies would bet on me because they thought my spiky, blond hair was lucky), but I really wanted something better. And then one night, I found it on the main floor of a Las Vegas Casino: CRAPS.

Call me crazy, but I’ve always had a slight aversion to craps simply because of the name. It just didn’t sound right – it didn’t roll off the tongue like “baccarat” or “roulette.” Nonetheless, I was a little drunk and it looked like something I should at least try once in my life.

So I stepped up to the table and stood next to the guy with the most chips. I might as well imitate him, I thought, so at least I wouldn’t look like a complete idiot. Low and behold, my strategy worked, and my $100 had become $270 in half an hour.

When my buddies found me and asked me if I wanted to go to a club with them, I refused – I was enjoying myself immensely and wouldn’t be leaving the craps table for the next two hours.

After several more trips to Las Vegas and a few rounds of online craps at an internet casino, my enjoyment of the game has grown. And even in the short time I’ve been playing craps, I’ve noticed that my skill has improved tremendously.

Of course, craps is essentially a very simple game (even though it may look confusing at first), and once you discover how to bet, you can be playing like a pro in a very short time. So here are a few tips to introduce you to the game and help you get started, whether you’re playing online or at a casino. My hope is that after you experience the game of craps, you’ll enjoy it as much as I do.

The basics of the game.

Here’s how craps works in a nutshell. And let me just say that the following section is the absolute fundamental foundation of craps – if you master this part, then you will be able to play craps. Say the round is just beginning (we’ll pretend that we’re in a real casino for the example).

Betting on the pass line. 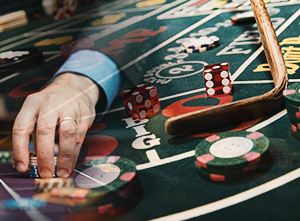 See that little space at the edge of the table that says “PASS LINE?” Put your bet here (this happens to be one of the best bets in terms of odds). Remember that this bet must be made on the shooter’s “coming out roll.” Now that you’ve placed your first bet, here’s what will happen:

The shooter will roll the dice and you are hoping for a 7 or an 11. If that happens, then you will automatically win whatever you bet. And if you can’t see the dice being rolled, trust me – you’ll know when a 7 or 11 has been rolled because people at your table will be cheering like maniacs.

This is called “crapping out.” I know, I know – craps is just full of vulgar terminology). If either the POINT or a 7 is hit, then the round is over and a new “coming out roll” will take place.

The best part about craps.

OK, say we’ve gotten past the “coming out roll” and no 7, 11 (where we win automatically) or 2, 3, or 12 (where we lose) was rolled. Now the shooter is throwing the dice until he rolls the POINT (the number that was rolled the first time) or a 7.

This can take a long time with many different rolls occurring, so what about all the numbers he rolls in the process?

You can keep the money on the 6 and 8 or take it off – maybe you want to move it to bet on 5 or maybe you want to take your winnings now – it’s all up to you. This is why craps is so much fun – you can place many bets and can keep getting paid off throughout the round.

So when does this fun end? ONLY WHEN THE SHOOTER ROLLS A “7,” then all the bets on the table are lost, and a new shooter is chosen and the new round begins. If the shooter hits his POINT, then all bets on the table carry over to the next round.

You step up to the craps table, toss down your money and ask for chips. You wait until the round is over and then place a bet on the pass line. The shooter throws the dice and rolls a 7. You (along with the rest of the table) start cheering and celebrating because you’ve just won your bet.

For the next round, you keep your original bet on the pass line and the shooter goes through another coming out roll. She rolls a “9” (which is the POINT). People at your table start throwing out bets on various numbers.

Once you’ve learned how craps is played, you’ll be ready to give it a try. You’ll also be ready to learn about the more advanced bets that make craps even more fun to play. So go ahead and give craps a try. You’ll join the thousands of people who fell in love with the game the first time they played, just like I did.

How to Play Craps.