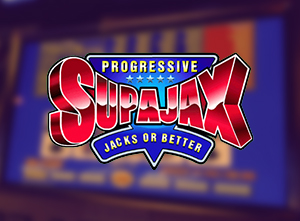 SupaJax Poker is a progressive poker game based on Jacks or Better Video Poker. A standard deck of 52 cards is used plus a SupaJax card. The SupaJax card is not a wild card and doesn't complete any winning combination except the Progressive Four Jacks and SupaJax combination

Winning combinations are paid on Jacks or better. The standard rate table is:

If you have been dealt SupaJax, four of a kind, straight flush, or royal flush then hold all. Otherwise, make the most from the cards contained in your hand by using the following priorities: