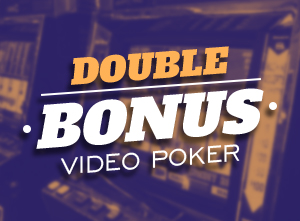 Double Bonus Poker is a game between you and the dealer and is played with a standard deck of 52 cards. Five cards are dealt in the first hand. Hold as many cards as you want to build the strongest hand. The remaining cards will be discarded and replaced with new ones from the same playing deck.

Double Bonus Poker is a standard video poker game based on Jacks or Better play except it has high payouts for the following hand combinations:

Double Bonus Poker payout is 80:1 for four 2's, 3's, and 4's and 160:1 for four Aces. In extended play, the increased payout for the 4 of a kinds don't make up for the lower payouts on full house combinations and lower.

In other words, unless you are consistently hitting straight flushes or higher, you are losing money.