Deuces and Joker Poker is played with a 53 card deck which includes a Joker. The Joker and Deuces are wild and stands in for cards of any denomination and suit to complete a winning hand.

The paying combinations begin with Three of a Kind. Minimum and maximum payouts are set by the casino. A standard rate table is listed below: 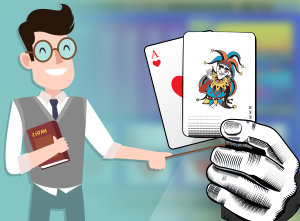 If you are going to play Deuces and Joker Poker, always play on maximum bet. On any bet less than the maximum, if you draw 4 Deuces and a Joker your highest paid combination will be 5 of a kind instead of the 10,000 coin payout for max bet on Deuces/Joker.

If you have been dealt (with or without Joker/Deuces) a royal flush, five of a kind, four of a kind, straight flush, or full house then hold all. Otherwise, make the most from the cards contained in your hand by using the following priorities: