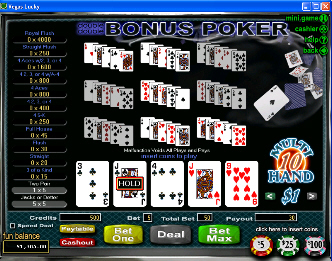 10 hands of Double Bonus Poker are played in this version with a bonus paid for specific 4 of a kind combinations. This bonus is double the amounts in the Bonus Poker game. Double payouts are made on 3 different sets of four of a kind - four 5's-K's, four 2's-3's-4's, and four Aces.

The pay table starts at Jacks or Better. Winning combinations are pairs of Jacks, Queens, Kings and Aces, two pair, three of a kind, straight, flush, full house, four 5's through Kings, four 2's, 3's and 4's, four Aces, straight flush, and a Royal Flush with the highest payout of 4000 coins for the Royal Flush.

A ten hand grid is used in this version of Double Bonus Poker. You are dealt 5 cards face up. Only the bottom hand displays the starting cards. Hold or discard as many cards as you want to make the highest paying combination.