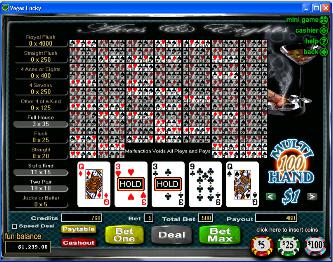 Aces, Eights and Sevens requires a little thought for optimum play and playing on 100 hands a game increases your chances for success. There are no wild cards in this game but high payouts are set for special combinations of four a kind Aces and Eights, four of a kind Sevens and four of a kind all others.

A deck of 52 cards is used and the deck is reshuffled each hand.

A one-hundred hand grid is used in this version of Aces and Eights Video Poker. You are dealt 5 cards face up. Only the bottom hand displays the starting cards. Hold or discard as many cards as you want to make the highest paying combination.

Each hand uses a separate 52 card deck and each hand contains the same held cards as the bottom line hand. Draw to be dealt the remaining cards to each hand from their separate decks. The highest combination is paid out on each hand. 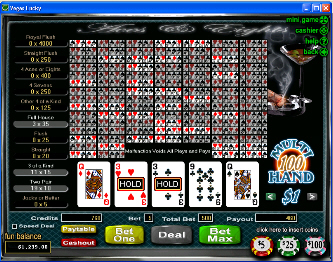