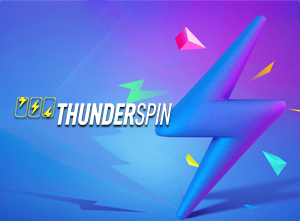 Based in Malta and providing modern slots that work on multiple platforms, but doesn’t have a vast number of releases to their name when compared to many iGaming giants out there.

Most likely, that would be since it is a smaller studio with a team of about 20 developers, belonging to the bigger company called Boss Gaming Solutions.

This practice that is becoming more common among big software developers to spread-out to several lesser studios does have its benefits, as it allows each of these studios to bring unique and instantly-recognizable style to their titles.

Being truly innovative in terms of design and modern solutions, the company brings a high level of gamification to its clients.

The developer is also known as AGames, previously called "Another Games", when operates under a Curacao license. Some of the titles created under the old name transferred to ThunderSpin.

Security-wise, the games are certified by Gaming Labs International and iTech Labs, providing a high level of safety to the players.

As a relatively new addition to the world of game providers, there isn't much additional information about the company’s licenses or even its history, so we’ll have to let their products do most of the talking.

Developed in HTML5, and envisioned as multichannel, this brand’s products work on any platform available today, from desktop to mobile devices.

JavaScript is also present among the technologies used in the making of these games, as well as other programs and languages that are, of course, the company’s specialty.

Jackpot system is quite innovative, offering jackpots on a pretty regular basis, and rather advanced technology is, in general, made in such a way to offer providers an opportunity to further tweak and enhance some of the game’s mechanics, first and foremost pertaining to bonuses that should attract the players.

With multiple languages and over 165 currencies offered, including the cryptocurrencies online casinos featuring their games should have no trouble at all presenting them to their clientele, whichever country they are primarily focused on.

Look-wise, these games are spectacular. Graphics are indeed very modern, with beautiful 3D animations and well-designed backgrounds, accompanied by music that fits the theme in question.

When it comes to the payouts, most of the products include quite a large number of them, even reaching to the impressive 21 payout in one game.

The theoretical return to player percentage is usually somewhat above the average. As a rule, they are standing around 96% and occasionally even reach 97%, which is rather generous.

Coupled with a generally low volatility…

…it also provides a basis for a good casino-to-provider partnership, especially for online casinos that primarily aim to offer a gaming library of higher-paying games to their customers.

As already mentioned, the number of games developed by ThunderSpins isn’t all that big. What they do offer, though, with their 30 and so casino slot games is nothing short of impressive.

Unlike many developers out there, the software truly commits to the specific thematic approach to each of their titles.

There isn't just a passing resemblance to the game's name that is to be forgotten as soon as you spend some time playing and find yourself spinning the reels of a typical slot machine, that hides behind a thin veil of the promised theme. These titles truly take you where they should, being both thematically accurate and visually attractive.

The Kingdom of Glory does send you to the Medieval period. The Queen of Spades delivers a vintage-looking slot machine on a Victorian backdrop, and Stellar’s superb graphics launch you into space, where you'll be chasing Wilds to multiply your wins among masterfully animated comets.

Most of these titles seem to be 3x5 virtual slot games, merging a classic slot platform with a modern design. Delivering expanding Wilds, Scatter symbols, bonus games, jackpots, and respins, most of them seem to feature everything you would hope for.

Do They Deliver On Their Promise?

The developer clearly stated in their brand mission that they aim to bring up-to-date and multi-platform products, and that is exactly what they do. ThunderSpin is a provider that incorporates modern solutions into their games, is something that becomes apparent from the first moment you lay your eyes on their releases.

If we were to highlight two things that make their games stand out, it would have to be the contemporary appeal, both look-wise and in terms of software technology and the well-developed bonus games that seem to be the norm among these titles, always delivering more entertainment and, of course, a chance for bigger wins.

To summarize, when it comes to content, ThunderSpins products stand as one of the better-developed slot games out there, with the potential to grow even better, if they were to adopt some additional game mechanics and other configurations.

What will the future bring to ThunderSpin and their yet-to-come releases, remains to be seen, but as of now, it is safe to say that they are on the right track.