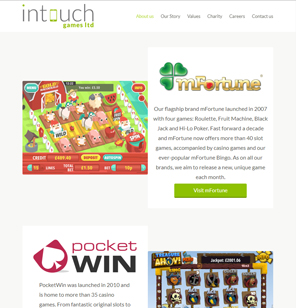 Representing themselves as a player-centric brand, Intouch Games constantly focuses on discovering what delivers value and finding the ways to implement that in product development. Aiming to provide exceptional player experience while on the move, the platform is functional both as a single native application on iOS and Android, as well as HTML for desktop. As a result, they provide the unrivaled support to 99.9% of all devices.

…the company continuously enhanced its digital capabilities while utilizing technological innovation and embracing a player-centered approach. Having more than 5 million clients in the UK, the multi-awarded brand has established itself as a dominant force within the eGaming industry.

The collection of their games currently comprises of 130 titles, all of which are designed, developed and promoted in-house from our Halesowen, Bucharest and Taipei offices to 80,000 players daily. The team employs more than 400 experts in charge of 4 mobile gaming brands.

…the company created a guide to help them follow the right direction to the stars. What matters the most to them is to:

When it comes to socially responsible behavior, the brand represents a role model to follow…

… as it proudly supports a number of projects both in the local community and overseas. Every year the company donates hundreds of thousands of pounds to help people in need. The comprehensive list of charitable activities in which the brand is involved is available on their official page.

Brief History of the Company

Back in 2001, Intouch Games announced the presence…

… as a physical slot machine and jukebox manufacturer. Realizing the increasing demand for well-optimized portable platforms, in 2006 the producer moved into online gaming by developing a mobile phone casino system.

The same year brought several more successes to the developer, as they became a nominated supplier to several of the UK's largest pub operators including Marston's, Admiral Taverns and Scottish and Newcastle. In addition to this, the company also introduced the Sound Storm digital MP3 jukebox. In 2010, the company decided to separate leisure machine and mobile phone casino activities.

As the range activities gradually expanded…

The industry seems to have recognized its outstanding efforts, and the brand won Product of the Year at the EGR Operator Awards, along with Best Bingo Operator and Best Poker Operator at the mGaming Awards. 2014 brought substantial changes, as the entire game development moved to the UK. The initial workforce gathered around 40 people who took over graphic design and development positions.

…in 2015 introduced 8 new titles and doubled the staff to around 80 devoted experts of various profiles. Another acknowledgment came when the brand was given a 1-star accreditation in the Best Company to Work for 2017 awards.

During the next year, the number of employed grew to around 300 people and the brand scored more accolades, as ‘Digital Business of the Year’ at the Midlands Tech awards 2018.

…the company holds a 5-star accreditation by Gamcare, and in 2015 London Stock Exchange Group listed it among 1000 Companies to Inspire Britain. Moreover, in 2018 the firm was acclaimed as the Winner for UKCCF awards.

The flagship brand mFortune was launched in 2007 and the grand opening brought four games: Roulette, Fruit Machine, Black Jack and Hi-Lo Poker. More than a decade later, the establishment proudly offers more than 40 slot titles, accompanied by casino games and the ever-popular mFortune Bingo. The team aims to release a new, unique creation each month.

… and is home to more than 35 releases of various types. Hosted by the mascot QB, the hub has become a formidable force in eGaming

The third project, Mr. Spin, launched in 2016, was the company’s first mobile-only casino. Initially hosting no more than just 5 games, it now boasts a noteworthy suite of more than 35 titles. The collection was recently enhanced with the introduction of Mr. Spin Bingo, which has become an instant hit with players.

… launched in early 2018 and quickly established itself as yet another promising and popular venue into the Intouch Games fold. The library currently features more than 15 creations, which represent the design team’s most modern and innovative online slots. The current year brought the opening of Cashmo, company’s fifth brand.

Though the selection of releases may be modest at each of these establishments, it gathers a diversity of content suitable for various profiles of players.

Promoting them as “bonuses worth shouting about”…

… the establishments offer quite a hefty package (with bonus spins) upon making the first deposit. The dedicated sections have various offerings on a monthly or weekly basis, as well as social media competitions and refer a friend program.

Another thing in common for all the facilities is highly-convenient mobile casino experience of the finest quality and efficiency. Wherever one happens to be, launching the game, accessing the account, making deposits, or requesting withdrawals, and contacting customer support, will represent no trouble at all. The handy Banking and Support interface makes all that happen hassle-free.