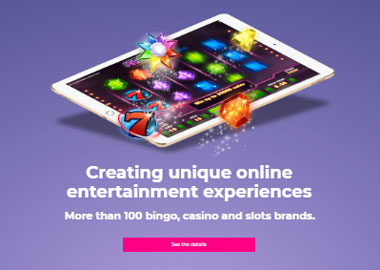 The full name of the company is Daub Alderney Limited, but it is more commonly known as Daub or Daub Games. Alderney itself is part of the Channel Islands, and one of the prime location for iGaming companies located in Great Britain. The company was established in 2008. It has not grown exponentially like many other companies, instead opting to concentrate on the qualities that make it a world-class producer of online games.

The company has three main markets: real money games, social gaming, and white label products. The latter means that Daub Alderney helps other companies run online casinos by offering everything from customer support to the collection of games to the whole backend software. The games in these casinos do not come solely from Daub, but instead from their whole network of partners.

Bingo games are the main forte of Daub. This is probably why they haven’t become such a big player in slots development, despite being in the industry for so long. These days it’s more like a fifty - fifty divide, just in time as bingo games are becoming more and more popular. It’s slots that bring in most of the players though. Scratch cards are a nice addition, rounding up the collection quite nicely.

The usual style for slots from this company is quite simple. Mostly it’s five reels and twenty or so paylines with some added special features. Keeping things simple is probably carryover of their long history as a bingo games producer. As an interesting tidbit, the company used to operate quite a long list of successful bingo sites before selling them to a third-party. The company was somewhat quiet for a while, but now they are making a comeback.

What is social gaming?

More and more companies dabble in social gaming, which is to say that they offer their games in free-to-play formats in popular platforms such as Facebook, Apple store, and such. This is an excellent way to test the games, and also to give players a good look at the company’s profile.

When it comes to Daub social gaming has other meanings besides the platforms. As we mentioned above, they offer bingo games, and bingo games are social if nothing else. This dimension is something that pretty much all companies are actively exploring. Daub has something of an advantage here, and we are sure to hear more about this in the future.

Check out more information at Daub Alderney homepage or LinkedIn.