Angle Gaming has been around since 2007, and they're licensed in Curacao. The first online casino to use this software goes by the same name and is owned by Gold Consulting SA.

Their games are regularly tested by independent auditing firm iTech Labs, and you can see the results of their reports straight from the Angle Gaming website.

When you add the fact that they include detailed return tables to show the payout rates of their games, they have set themselves up to have a solid level of safety and transparency.

It's important to point out that their software was previously named 3Dice after the 3Dice Casino that they had an exclusive, multi-year contract with. Once this exclusivity was up, their software started going by the name of their company, Angle Gaming. 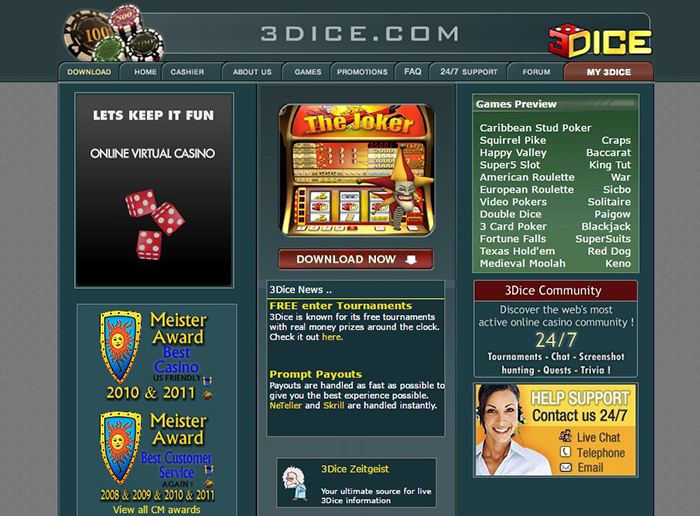 The designer of the Angle Gaming software is an ex-designer from Blizzard Entertainment. This is a huge company that's made a ton of absurdly-successful video games like Diablo, Starcraft and World of Warcraft. About 100 total games are available, and almost all of them use 3D graphics.

With that having been said, you'll need a PC that has Java installed to run these games, and their high-level graphics might slow down older computers. Also, you have to download their software, and there isn't a no download option available.

Their game selection includes tons of table games, video poker, slots and other games that you wouldn't find anywhere else.

They do not have a huge selection of online slots compared to the total of the rest of their games, however, and this is something that might throw some players off. They also have no progressive slots.

Tournaments and the Social Factor

Something the Angle Gaming software does really well is give players opportunities to chat with each other. There are moderators for the chat options, and these moderators can also offer tech support for the software and the casinos that run it as well.

One of the main complaints that people have had about online casinos is the lack of social interaction, but with Angle Gaming, you can meet new people and make friends as you play.

Tournaments also make this software stand out since it's set up to allow tournament events of several different types. Freerolls are a big part of the casinos that use this software because of this tournament setup, and they have plenty of options for tournament players built right into the software itself. These events are great for building up your list of friends and meeting new people.

To add another layer to the social interaction that makes Angle Gaming stand out, they also offer an Internet radio stream. To our knowledge, this is the first online casino software to have this built in as an available feature.

This adds a level of interaction that you don't normally find with online casino software packages, and it just goes to show that everything about this software is designed to give players as immersive of an experience as possible.

This is very impressive, and when you add in everything else they're doing, it gives them good chances of expanding in the next few years and gaining more of a reach.