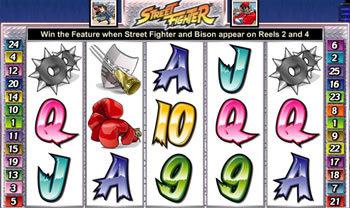 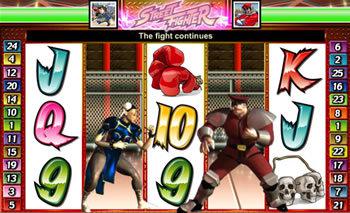 You’re walking down a dark and dirty street ally, other than the sound of a distant siren, all else drowned out by the echo of your footsteps and the sound of rainwater flowing into a sewage drain.

Up ahead you spot two menacing thugs getting ready for what appears to be a fight to the death. You’re not dreaming; you’ve just stumbled upon Street Fighter, the 5 reel with 25 pay line video slot from Cryptologic with Scatters, selected Wilds and a Feature Round, where fights may be won but the battle has just begun!

The Street Fighter symbols are; the 9, 10, J, A, K and Q, the Spiked Rings, roped Skulls and Boxing Gloves. For a good fight the Blades and Shield work well and the Street Fighter logo is found scattered on the reels. The wild Characters, other than Bison, are; Chun Li, Guile, Ken, Ryu and Sagat.

Betting limits range from 0.01 to 20.00 credits on 1 to 25 pay lines with a top payout of 5000 coins for lining up 5 symbols of a mask and bladed weapon. Winning combinations pay from left to right only except scatter logos which pay any.

Don your battle gear and be prepared for what may be lurking in the shadows.

If you love the thrill of the fight, Street Fighter is the online slots game for you! 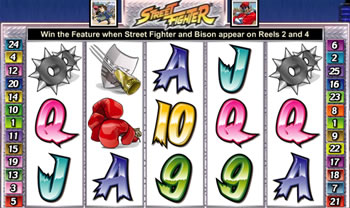