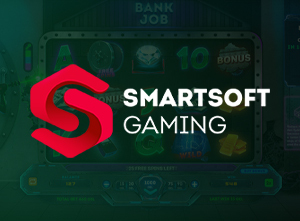 Given a plethora of online slots available out there, is that ever possible to come across a game or an extra feature you haven’t seen before? Well, thanks to an ever-growing army of software developers who have no shortage of innovative ideas, players can count on spinning the reels equipped with some unique bonuses. No doubt, SmartSoft Gaming is one of the studios that belong to the aforementioned army as its Georgia-based team has done a great deal of work to make their games stand out from the crowd.

Officially founded in 2015, this brand boasts a pretty extensive portfolio of online slots that have already become pretty popular among the gambling community. While the success of titles designed by this B2B provider can be easily explained by striking visuals spiced up with intensive animation and interesting themes, it seems that the main reason for popularity lies in a truly diverse set of extra features, with some of them being incredibly exciting mini-games. If you are still unfamiliar with SmartSoft creations, read on to find out what makes them special.

SmartSoft Gaming is one of the slot makers that work only with five reels or at least, up until now this studio has introduced no classic slot with a timeless 3-reel grid. While the majority of titles feature a standard 5x3 playfield, punters will also come across a number of releases built on a 5x5 layout. Sweet Candy is one of them and besides being a feast for the eyes of all those with a sweet tooth, it is also packed with plenty of excitement thanks to three types of bonus symbols and an array of rewarding Missions.

Speaking of the reel mechanics, the brand offers a wide range of options: fixed and non-fixed pay lines, 243 ways-to-win, as well as rolling reels and avalanche wins. Aztec Slot is the one enhanced with advantageous Avalanche Multipliers – the multiplier has an initial value of 1x and 3x in the base game and free spins respectively and increases with each new avalanche. One of the slots equipped with the Rolling Reels feature is the mysterious Moonstone that also lets players take advantage of stacked wilds and free spins with multipliers.

Plus, the great bulk of titles include the gamble feature, giving punters additional opportunities to double their prizes by trying to guess the color of a playing card. Plus, many releases are enriched with the Buy Bonus add-on (in Apollo 77 you can buy two different bonuses), meaning you do not have to wait for the bonus to be triggered.

Even the first online slot launched by SmartSoft Gaming had a decent set of extras including stacked wilds, free spins, and the Risk game. By the way, that 20-line spinning adventure was a real tribute to Vegas appropriately called Casino Slot. Since then, however, the company has further extended the range of bonus features, incorporating engaging mini-games and varying the way those bonuses are triggered.

While in some games you need to hit at least three special symbols to get free rounds or enter a bonus, in many slots you will run into a totally different way of activating extra features. For instance, in Birds, treats on the house and bonus games are not triggered by hitting a certain number of scatters or other special icons but by collecting 100 free spins or bonus symbols respectively throughout the base gameplay. Just a heads up, if you raise your bet, be ready to lose all the already accumulated icons, therefore think twice before opting for a certain stake amount.

When it comes to mini-games, let’s take Bank Job as an example. To enter the bonus in this 243 ways-to-win online slot, players need to collect 15 keys (3 bonus symbols make 1 key), then they have 60 seconds to open with the drill some of 30 safes before the alarm goes off. The great thing is that if you do not want to wait for 15 keys being collected, you can simply pay for entering the bonus!