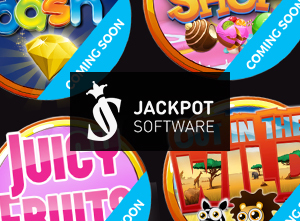 Jackpot Software has a diverse portfolio of online casino games but slots are given a central place in the product range of this USA-based company. True HTML5 wonders, they are star performers across all desktop and mobile devices, letting players take advantage of captivating storylines and rewarding bonus features. It’s worth mentioning that titles produced by this studio are low-roller friendly since the majority of them are available already at $0.01 a spin.

Well, luckily, affordability is far from being their only virtue, so without further ado, let’s take a closer look at innovative one-armed bandits produced by a young iGaming developer from Atlanta, Georgia.

There’s a reason this casino game maker is called Jackpot Software. From day one, it has produced online slots enriched with a progressive jackpot. American Payday, Fusion Sevens, Olympus Treasure, and many other titles offer a possibility to strike a whopping win by landing the top prize shown in the paytable.

Depending on the game, it could be five wilds or five top-paying regular symbols, the main requirement for activating a jackpot is a max bet, which is usually $5. The jackpot starts at $1,000 and grows with every single stake that contributes to the pool by 1%.

If you think one jackpot is not enough, check out the immersive Gold Stallion that features the whole three progressives: Mini, Major, and Mega. All three can be triggered through the Moon bonus that nicely starts with 3 free spins on the special set of reels, again, a player has to activate all 25 lines at a max bet. By the way, it’s one of the rare titles to allow triggering of a jackpot in the bonus mode, other progressive releases from this studio offer such an option only during the base play.

A great number of Jackpot Software online slots are built on the same template that features a standard 5x3 grid, 25 pay lines (the number of active lines can be adjusted), and a solid package of extras, which are also pretty much the same in the majority of titles.

All who fancy treats on the house will be happy to hear that free spins are an inseparable part of the plot. Players can activate 10 free rounds by landing at least 3 scatter icons anywhere on the screen. Another great piece of news is that those sought-after goodies can be re-triggered.

Pick’em Bonus is one more thrilling add-on that may vary depending on the game in terms of the way a player can obtain the prize, but generally, they can be divided into two categories: single-pick and multi-pick. The former is self-explanatory and the prize is revealed in a single pick while playing the latter, you will be asked to select certain objects to discover hidden awards, all until you still have remaining picks.

In some games, Flaming 777, for instance, the pick’em bonus is about matching playing cards with the purpose of finding a pair. Regardless of the feature type, it’s triggered by hitting at least three special bonus symbols while winnings within the bonus game are capped at 200x bet.