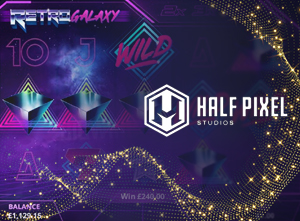 Presented as one of the Microgaming’s independent associates, Half Pixel Studios entered the industry to bring some innovations and conquer the audience with its visually-appealing content. To show that they are willing to go beyond any boundaries, they symbolically selected space as their first theme but combined with vintage aesthetics.

What can players expect in Half Pixel’s releases?

Judging by the premiering one, dynamic features and immersive visuals. This winning combo, to call it so, is the one that instantly captures consumers’ attention.

Actionable Features to Spice Up the Atmosphere

Wanting to energize the game maximally, the studio opted for quite an inventive approach in the field of features. The very first outside-the-box detail is the mechanics seen on the reels. So, instead of ordinary ones, Retro Galaxy is equipped with Rolling Reels.

Appearing in both base game and during extra rounds, this option has the power to remove winning icons, and make room for new ones to replace those. Also, it awards multiple consecutive wins, and it comes with one more “superpower” called the Multiplier Trails.

What are the characteristics of this feature?

Being a sort of a booster, this is basically a win multiplier. It starts at x1 on the initial spin, and as the number of rounds increases the multiplier enhances as well- to x2 on the first roll, x3 on the second roll, and goes up to x5 for any subsequent rolls. This is how it works during the base game.

When it appears in bonus spins mode…

…it increases by one with each roll and doesn’t reset between rotations. In the initial round, it boosts 2x, with the maximum of 15x.

Moreover, there’s Wild which serves as a substitute for all symbols except Scatter and it can be found on reels 2, 3, 4, and 5 in both the base game and during bonus spins.

And finally, Scatter, which pays in any position. When 3, 4, or 5 these symbols hit the reels they trigger 10, 15, or 20 additional rounds respectively. They appear on all reels in the base game, and on reels 1, 3 and 5 in bonus spins. When 3 of them appear in the latter mode, the retrigger 5 more complimentary rotations.

Whichever way you turn it, it’s a journey-either through time or through space. And having both of them in one 5-reel slow with 243 ways surely promises something refreshing.

Featuring Royals and classics as symbols this neon-painted work of art is a fine choice for those looking for something that comes with a twist. It may be a topic told so many times (both space and retro stuff), but it’s the unique spirit that differs it from others. Plus, it comes with slightly gloomy audio and some special audio effects which spice the atmosphere up significantly.

It surely justifies Microgaming’s description for August 2020 lineup, where it was heralded as “funky, retro-space adventure”.

Anything Else in the Pipeline?

Having in mind that they are aligned with Microgaming, punters can expect noteworthy products in the upcoming period.

Plus, Half Pixel Studios’ debut product Retro Galaxy is already available in some respectable venues such as ComeOn, Blitzino, Cherry Casino, Casoola, Kassu, Spela, and more, which confirms that the quality is recognized.