A cup of coffee and a few rounds of slotplay, that doesn’t sound like such a bad idea at all. Such a relaxing setting can only be the result of hard work, and Espresso Games is a company that surely takes the business seriously. The brand itself works under Talenta Games, being their flagship gaming studio. The company has been producing online casino games since 2002, so they have plenty of experience and vision on how to do things just right.

That expertise extends from the games themselves into a pretty strong software suite, which even comes with the ability for casinos to enable their own jackpots for these games. The company originates from the UK, though today the main studio is located in Italy. You can be certain to experience a ton of different influences in these online slots.

A Showcase of Themes 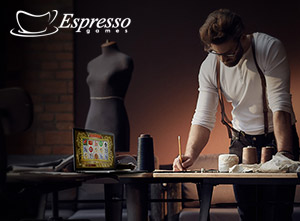 A mixture of branded games, musical and cartoonish subjects, classic themes, and common subjects make up the vast majority of themes in these games. But you will also find some rather unusual titles, like Boobies & Booties, Ninja Cats, or Bad Granny. The overall scope is surprisingly large, especially considering the size of the studio itself.

The graphical style seems pretty consistent across the board. Some games do go for a bit higher quality, and better style, but in general it feels like something of a light and comical touch. A surprising amount of detail has gone to the background, and this applies to animations too. Music and other audio effects are of pretty high quality too, matching the theme instead of simply offering random sounds. On the whole, if you’re looking for variety in themes then Espresso Games is going to surprise you in a multitude of ways. 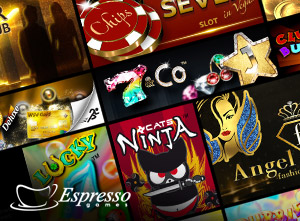 2050 Escape from mars, Nebula, Mad 4 Valentine's, Better Sound, Van Penguin, 7th Sense, and Cluck Bucks are some of the more popular online slots from Espresso Games. All of these games tend to have the same five reels, though you will probably be slightly surprised by the paylines. Usually, these come in multiples of five, but with Espresso the setup is 18, 26 or 32 paylines. Another way of counting wins is the so-called “combo” system, which is pretty much the same as ways to win. That is, matching symbols on subsequent reels count as combos. Pretty simple, and in both cases the wins can be quite magnificent when combined with high variance paytables.

Special Features are surprisingly diverse. That’s not to say that bonus spins wouldn’t be featuring often, simply that even these tend to be reinforced with a variety of modifiers like multipliers, instant wins, or respins. If you’re after really big wins you might want to opt for the bonus spins that come with 100x win multipliers. For something a bit more interactive, you can choose pick me bonuses, mini-games, or other similar bonus features.

Other Casino Games from Espresso

It’s not only slots that you’ll get your hands on. Espresso Games has a suite of table games, common draw games, and a fair few video poker games. The first category is probably familiar to all casino gamers. Roulette and blackjack are the two most iconic casino games, and they have remained popular from the very first tables to those that are played online. There are some surprises in store though, such as Euro Twins Roulette, which might add in an extra ball on the roulette wheel.Blackjack and even baccarat have similar features, or extra bets, which is something different for games that usually offer just basic gameplay.

Video poker from this producer is surprisingly modern. Sure, it’s going to use the same hand setup that we are used to when it comes to paying wins, but the graphics, animations and even sound effects are on a whole another level. And of course, there is support for mobile devices too.

So what are the common draw games? These are a group of number and table games with a shared method. The common draw simply refers to the rounds being played through a common pool. For example, every 30 seconds or every minute a new round is played in roulette. Or a new set of numbers are drawn in the Power Balls game, which themselves are much like lottery. It’s an interesting concept, well worth checking ou