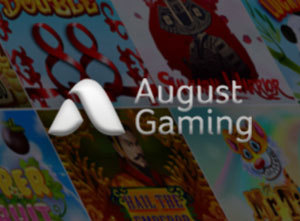 August Gaming started operating in 2015. They hold a license from Curacao and their games are meticulously tested by iTech Labs. Although their main area of operations is Asia, and a lot of their games carry Asian themes, it’s still not quite clear where the company is actually from. Regardless, their main goal is to be the main content provider for iGaming needs all over the world…

...and they still have ways to go to reach that goal. The start is not too bad though, with the early titles aiming for retro-graphics and a mix of modern and classic features, wins and specials. It’s taken the company a few years to build up their slot catalogue, with some attention also paid to scratch cards and lottery games.

Though the majority of these games trust in themes that have a lot to do with Asian countries, stories and mythologies (which also makes us think the company originates from there), there are more than enough that break away from that monotony. The slots that do employ these themes tend to do so quite well, even if the selected graphical style isn’t always the best one.

The carrying theme in most games has something to do with a famous story, be that about gigantic gorillas, Japanese princes, or mystical djinns. Of course, some of these games trust in the simple charm of pandas and other animals.

Most of the slots from this publisher come with the standard five reels, with three symbols on each reel. What can we say - it’s the standard for a reason!

Luckily, here is where the parallels tend to end. No two slots are the same, which means that there is some hefty work going on in regards to mathematics. No wonder then that this is something that the company takes pride in…

...and if you are wondering what exactly does this mean, you’ve come to the right place to find out. The paylines and payway systems differ from game to game, as do variances. Unfortunately, RTP figures are not readily available, but they seem to be high enough to make the returns worth your while.

And have a look at the special features too!

The wild symbol tends to play a different role in each and every game, and it’s usually responsible for raking in swathes of spectacular wins. But it’s not the only special symbol, as usually you’ll find a themed one as well, with further functionality to add big prizes to the games.

Or, as is usually the case, the extra spins that come in all sorts of varieties. Instant wins and scatters are aplenty too, with all of this conspiring to offer you a chance to score those game-changing runs on a single spin. It’s not all high variance gaming (really shows they have experience with scratch cards), as there are some slots that break away to offer smaller wins more often.

We suggest giving the games a go in demo mode before striking in with real or bonus money!