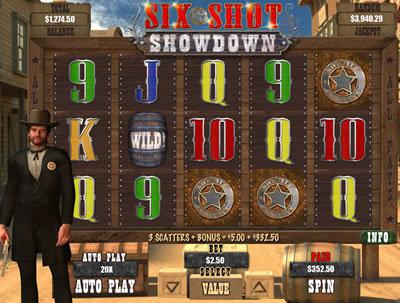 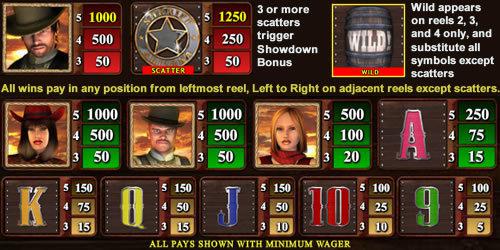 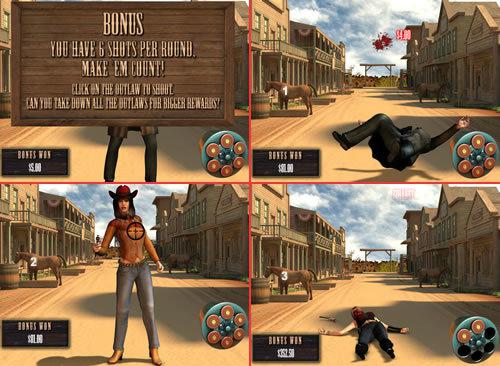 Six Shot Showdown slots have 5 reels and 243-ways to win with some 3D animation, wilds, scatters, and a Wild West shootout bonus feature that gets you to hit it with your best shot!

Not as fully fleshed as several of the 3D animated slots out there, Six Shot Showdown slot uses traditional wilds and scatters as part of its allure.

The only animation in the game comes from the cowboy standing in front of the reels, he moves on occasion, and during the bonus feature.

This game features a simplified wagering process. Just adjust the value of your total wager, from .25 to 125.00 credits per spin, using the up and down arrows at the middle of the info bar beneath the game.

Play goes from left to right and all symbols need at least three to award a payout win. The Cowboy is has the largest price on his head, and you’ll get 1,000 credits when five land on a payline.

Oddly missing from the pay table is a description of the game’s random progressive jackpot. Awarded randomly at the conclusion of any spin, the Progressive Jackpot winnings (starting at $1,000) are added to the player’s other spin wins.

Is the Barrel “Wild” symbol, which is the replicator (or repeater) for the symbols in this game:

Is the Sheriff Badge symbol and it helps to activate the game’s feature game, and can offer big rewards with a large sum of cash:

Is triggered by three or more Sheriff Badge symbols; which activates a shootout bonus game that sets a classic Western shootout scene.

You will have six shots in your pistol to take down each outlaw. Your job is to select exactly where your want your shots to go. Make your marks count and you’ll earn extra credits:

This slightly animated slot game features Auto-Play, a hands-free way to enjoy the game. Customize it to include your wager, how many spins you’d like it to spin for you, and what your maximum loss and win limits are.

It’s a great way to enjoy a game while still playing responsibly.

Play the Six Shot Showdown slot game, only at Bovada online casino, and have a shootout of your own! 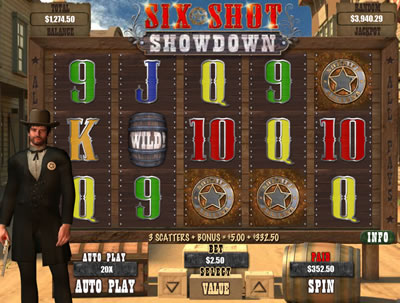