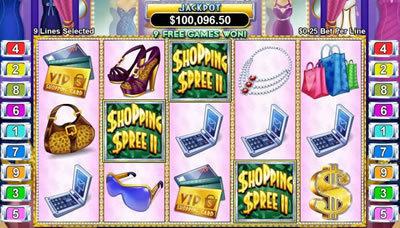 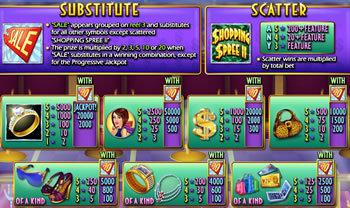 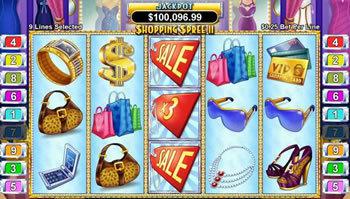 RTG takes all the work out of their Shopping Spree II progressive video slot with a nice jackpot, 5 reels, 9 paylines and bonus rounds.

It also has free spins and wilds, and has a set wager of $2.25 with all nine lines in play, and an AutoPlay that sets with a touch of a button. Its like a huge day of shoppingwithout the blisters, the aching arms, and the buyers remorse!

Shopping Spree II slots only bears a slight resemblance to the original Shopping Spree. This seasons version is brighter, shinier, and features some high-end symbols that are sure to catch your eye (lets also hope they catch your wallet).

Aside from the bonus symbols (which Ill get into a bit later), youll want to keep your eyes on these prizes:

The Diamond Ring symbol is your high-paying icon in Shopping Spree II slots with five on a payline bringing you $5000. If you can pair them with the x20 symbol, you win the big Progressive Jackpotworth over $100,000 at the time of this review. An added bonus? You can score with just one Diamond Ring on a payline.

The Savvy Shopper symbol is also a heavy-hitter (what can I say? She looks like an aggressive bargain-hunter).

For the payouts on the rest of the symbols, keep in mind that the Shopping Spree II progressive slots pay table and rules are hidden a bit and are available with the Help button.

The number of paylines and the wagers in Shopping Spree II slots are set. Wagers will always be $0.25 per line, and youll always play the maximum number of lines (which equals $2.25 per game) with its play going from left to right.

If the Sale Tag symbol helps create a winning combination, the payout is multiplied up to 20x the wagered bet!Except for the Progressive Jackpot (but wouldnt that have been nice?).

For every 1,000 points you tally during free games, youll get an additional 3 games (for up to an extra 12 total) towards the Bonus Round feature. Scatter logos do not appear during this free games feature.

The Shopping Spree II Bonus Round is triggered at the end of the Free Games feature:

Didnt quite earn 1,000 points during the free games feature? Dont worry; there are consolation prizes available in the form of wager multipliers where you can win from 3x up to 100x your bet (depending on the total points made; the less points made, the larger the prize). 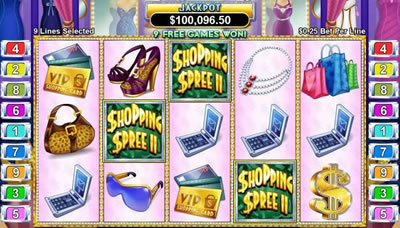