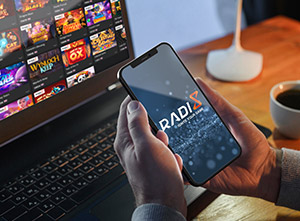 Radi8 is actually an affiliate brand of Genesis Gaming, which means that the company runs more like a semi-independent studio under the much larger parent company. There isn’t too much information available on the exact origins of the company, such as whether it was a completely independent studio, or simply a project started by Genesis. Whatever the case, the team has been producing online slots since 2018.

Two things that stand out with these slots and the company, is that they are mainly aimed at mobile players, and they go with an Asia-first attitude. The latter is an especially interesting aspect, and not something you run into often in markets dominated by Western game producers. This is certain to bring some fresh air and new ideas when it comes to themes. The company does hold some European licences though, such as ones from Malta and the UK.

When we talk about mobile support we usually mean HTML5. This is of course used here too, but what it simply means is that the games will work through any modern web browser, and are usually automatically resized to smaller screens, or in fact screens of any size. It’s the same as looking at any website from a smaller screen.

But that’s far from the case here. What mobile-optimisation actually means is that the games are planned and designed for mobile devices in the first place. You’ll see this immediately with the way the games are set up to look good on smartphone screens, which are rectangles rather than the squares that most monitors are. Likewise, the interface is made with a touch screen in mind. Of course, the games are still playable on any device. But if it’s a mobile casino gaming you’re after, Radi8 just became a choice you probably didn’t know about. 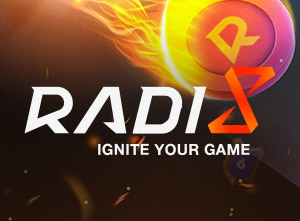 The Asian influences are pretty obvious once you make it to the gaming selection. Above titles are joined by others like Ganesh’s Blessing, Panda Pursuit, Gongxi Facai, Year of the Rat, Cat Kingdom, and Dragon Blast. You’ll find a few more usual names in the mix too, like Wynloch Keep, Galaxy Stars and Tiki Towers.

But does a name make the game…

…only if it’s followed by these sorts of graphics and functions. Mobile games these might be, but they’re certainly not for users with spotty internet connections. Radi8 is heavy on graphics design, and this means that the games look good, and take a fair bit of time to load up. Animations especially are on a whole another level, with detailed and reactive symbols used on every title. These are truly next level mobile slots, sure to entertain.

High volatility, high feature frequency and high RTP are some of the common factors in many of these slots. But beyond these, it’s clear that each game comes with a full set of slot features. But before we get there, make note that the reels don’t exactly look like the standard setup we’ve all come accustomed to. The reels are extended up and down, sideways, or at best conform to the three times three way of doing things. You’d be surprised how many different variations you can really come up with when you put your mind on it.

As for the specials, they seem to be aiming at doing something entirely different than offering the usual bonus spins, wilds and scatters. Naturally, you will from time to time run into those too. Often with several choices, depending on your preference of spins. But mostly these special features try to create action on the reels via different sorts of modifiers, as well as giving some freedom in the form of interactive specials.

For example, in Luxe 555 players can choose to use Luxe Lines, which allows custom betting on select paylines, multiplying wins. Same game will give you chance respins, allowing for another try at scoring wins. In Storm Rider players will be served with bonus spins that come with charging symbols, which you can collect to further increase the number of spins. Mega wilds are also part of the party, and likewise duplicating reels can make it easier to score wins. Winning streaks, sticky symbols and many other forms of specials will become familiar when you play Radi8 slots. No wonder Genesis Games is proud of their studio.