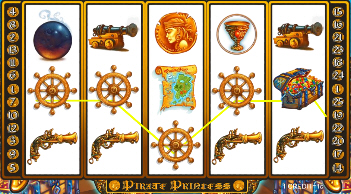 As with all the Hype games, the color and graphics of Pirate Princess is eye catching.  When you combine that with the popular Pirate theme, it makes for a game with multiple possibilities.  Just add a bottle of rum for that ‘pirate’ touch!

Pirate Princess is a 5 reel, 25 payline video slots game that incorporates a wild symbol, several bonus feature games and free spins with a kick to deliver a treasure chest of opportunities to win.

The Ships are one of the scatter symbols and 3 or more ships anywhere on the reels will trigger the Ship Battle Feature.  You will be presented with 5 cannons to fire, and you get one shot for each triggering ship.  You can win anywhere from 2x, 5x, 10x, 25, or 100x the triggering bet.

The Cannon is another scatter symbol and 3 or more adjacent cannons appearing left to right starting on the 1st reel will trigger a free spin round.  You can win 5, 7 or 9 free spins; the amount is randomly chosen.  During the free spins, if a cannon appears on the first reel and a ship appears anywhere on the same row, the cannon will fire and the sunken ship will award 5x, 10x, 25x or 100x the triggering bet OR 2, 3, 5, or 10 additional free spins.  Things to keep in mind on this bonus game:  the ship symbols on the first reel are replaced by cannons; the cannon symbols on the other reels are replaced by ships; there are no wild symbols in this bonus round since all Princess symbols are replaced; the ship scatter symbols don’t payout on this bonus game and the game cannot be retriggered.

The third scatter symbol is the Map and 3, 4 or 5 Maps appearing adjacent left to right from the 1st reel will trigger the bonus feature.  You will be presented with a map containing ‘X’s (X does mark the spot in this case!) and you click on X’s until you have revealed 2 alike.  The revealed multiplier will be applied to your triggering bet and credited to your balance.  This feature can not be triggered during free games. 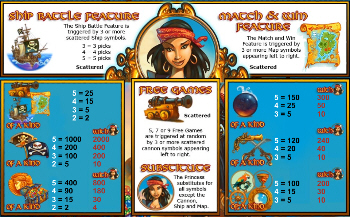 Pirate Princess is a game for players who like bonus features, quality design, terrific payout possibilities and a good time.  Drink up, me hearties!