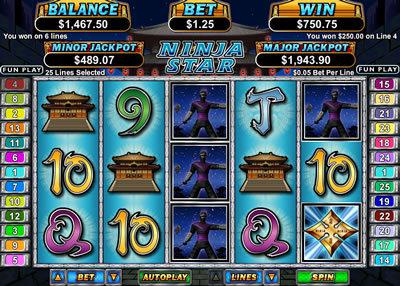 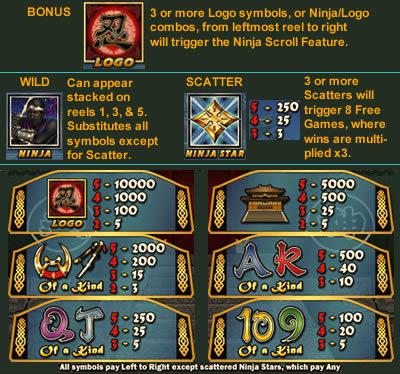 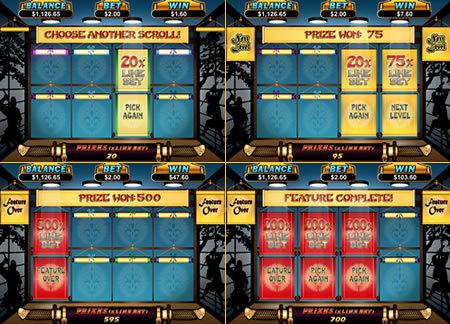 You’ll feel all the strength and agility of the night-fighters with every click of the spin button, and in this RTG slot you can win up to 10,000 coins.

Ninja Star slot, despite its new release on March 13th 2013, still has that beloved classic-slot feel.

The reels are more overrun with small payout wins instead of animations, and you get the feeling you are getting your money’s worth as you play since the winning chimes are nearly always firing. I especially love the turbo AutoPlay feature.

All but the top four paying slots (the Logo, the Dojo, and the two weapons) need at least three symbols from left to right to award a win. The highest paying symbols (four of them) need only two symbols for a win.

The Logo symbol will award the 10,000-coin jackpot when five of its symbols land on an active payline. The Logo symbol also will activate the Ninja Scroll Feature, outlined more specifically below.

The two progressive jackpots, the Major and the Minor, can be won at the conclusion of any real-money game. Since the jackpots are triggered at random, the only way you can win them is to play the game.

Is the Ninja symbol and it will help to form extra wins throughout the game play:

Is the Ninja Star symbol and it will help to trigger an extra games feature, in more ways than one:

Is triggered by three or more scattered Ninja Stars anywhere on the reels:

Free games and triple payouts are easier to do since the Logo symbol is replaced by either the Ninja Star scatter or the Ninja wild.

Three or more Logo symbols landing from left to right from Reel 1 will launch a second screen bonus feature, where four sets of scrolls are revealed:

The upper level of scrolls will always contain prizes; the bottom will decide your fate. You can play up to three levels, and each level may award higher prizes. The bonus feature ends whenever the “Feature Over” scroll is uncovered

The pay table states that if the three or more Logo symbols happen to activate from a multitude of paylines, the player will receive one bonus feature for each activation.

Play Ninja Star Real Series slots to find out how many bonus features you can collect on!