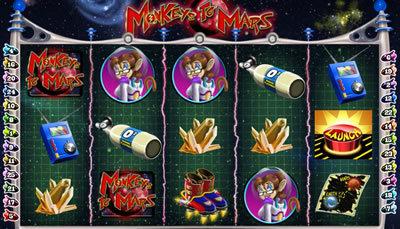 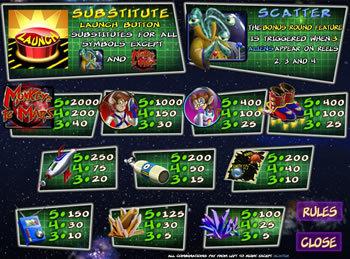 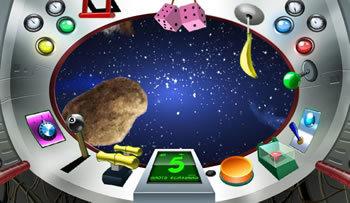 We're sure you've heard the term "don't you monkey with the monkey" before, well now you can with Monkey to Mars video slot from Cryptologic.

Go on a 5 reel 25 payline adventure with its asteroid bonus features, rocketing re-spin features, and expanding wilds during winning combinations.

You will see some really bizarre symbols in Monkeys to Mars online slots, such as two types of Crystal Formations, a blue Transmitter device, the Lady Monkey-naught, Rocket-powered Boots, a funny-looking laser Weapon, an Air Tank, and some kind of Space Map.

The wagering in Monkeys to Mars online slots is something even you can monkey-around with and figure out, because you can select from 0.01 credits up to 20.00 credits per line or 0.25 to 500.00 credits while playing all 25 lines.

All the symbols will give payouts in Monkeys to Mars slots going from the left to the right except for the Alien Scatters which may pay anywhere.

The Re-Spins Feature is triggered randomly during the game.

The Monkeys to Mars Rocket Re-Spin Feature cannot be retriggered.

When 3 Alien Scatters appear anywhere on reels 2, 3, and 4 at the same time, the Monkeys to Mars Asteroid Bonus Feature will be triggered:

It's a pretty straightforward bonus game-you have a choice of several levers, buttons, and knobs in order to attack aliens and asteroids. Every shot is a hit, so you don't have to worry about aiming at anything.

The real trick is picking just what ammo (the banana grenade? the button rocket?) will bring in the big bucks.

Have a blast of a good time shooting aliens and asteroids in Monkeys to Mars slots! 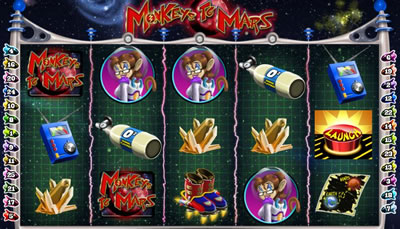