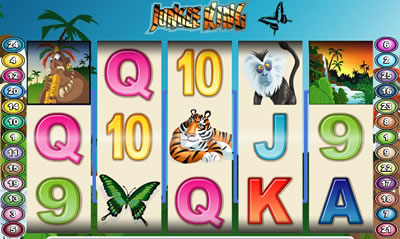 Introducing Jungle King, a 5 reel 25 payline Vegas Technology video slot, and this one has doubling wilds, scatters, bonuses, and a 7,500 coin jackpot swinging from its vines! The lion may reign in other parts of the world, but in the online video slots arena, the role is played by a scantily clad, yet lightly be-feathered musician.

With colorful graphics and nearly smiling wildlife, Jungle King online slots make the wilderness seem like a friendly, welcoming place. This jungle's most generous inhabitants are the Tiger and the Monkey, followed closely by the Flower and the Butterfly. 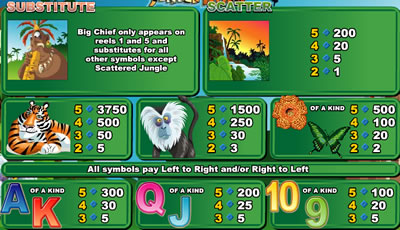 I'm all about coverage, so I'm more apt to strike a lower coin value with a full payline capture (in other words, playing all 25 lines). 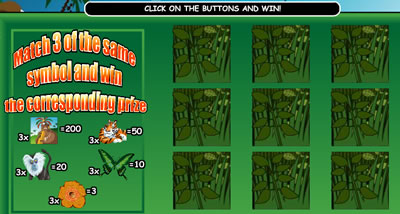 It's a nice change of pace from having all the payout weight on the feature symbols, but that's not to say the doubling wild isn't a nice touch!
All the Jungle King slot play is from left to right and/or right to left with the exception of the Jungle Scene scatter, which lands and pays out where it wants.

The Jungle King slots Big Chief symbol is the Wild symbol. Hes the only human in the bunch, so youll know which one he is.

The Jungle King Bonus Feature is activated when the Big Chief presides on Reels 1 and 5 at the same time.

Grab a vine of your own and swing in to play Jungle King online slots, because it may be a jungle out there, but at least this one can be tackled in air conditioning!