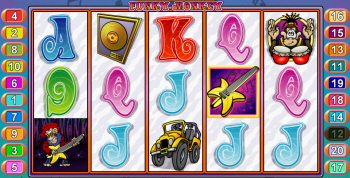 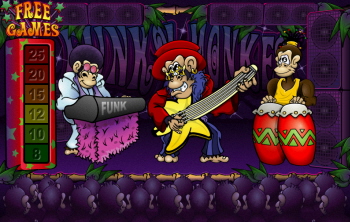 Do you feel like getting funky every once-in-a-while? Now is your chance, by playing the Funky Monkey online slots game. In this RTG powered game, with 5 reels and 20 pay lines, there are Wilds, a Bonus Round and Free Games.

Get a feel of going back to the ‘70’s with this monkey music slot, where the monkeys come alive to show you a little blues, jazz and rock-n-roll. If by chance the audience likes the monkey music in this game, you may have a chance to rake in the dough during its free games.

While having all the slot spinning fun while playing Funky Monkey slot, here are the symbols you will see in this game as shown in the pay table; the Funky Monkey symbol may drive you wild during your play, the 9, 10, J, Q, K and A symbols are there to keep the credits flowing, and the Banana Guitar symbol sounds good with the hip-hop Bongo Monkey symbol.

The Funky Monkey slots Organ Monkey symbol plays on the synthesizer to make all that jazz sound better, the Yellow Jeep symbol keeps the band of monkeys on the move while their Gold Album symbol is hanging on their office wall at Funky Monkey studios. The Funky and Monkey symbols will give you a few extra spins for more credits during your play.

The Funky Monkey online slots wagering is not all that funky to figure out; you can bet from 0.20 credits per spin, when playing all 20 pay-lines, up to 100.00 credits per spin. All symbols pay from left to right, except for the scatters which pay any.

Now that you have the game plan of this funny monkey game, it’s time to get to the Funky Monkey slot game and claim some of those crazy credits for yourself!